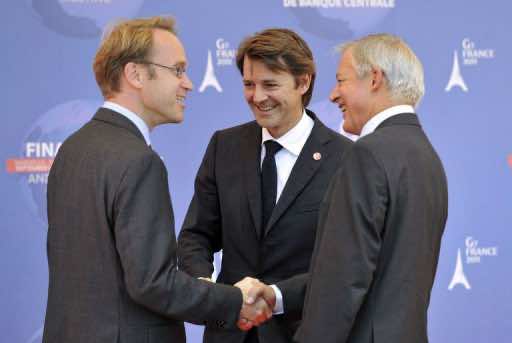 MARSEILLE — Finance ministers from rich nations met Friday to find ways to rekindle the faltering global economy just as markets were again in turmoil amid skepticism over a US stimulus plan and doubts about European banks.

The finance chiefs and central bank governors of the G7 group of industrialized nations began their talks a day after US President Barack Obama unveiled a $447 billion (322-billion-euro) jobs plan to energize the world’s largest economy.

The gloomy economic backdrop was underlined when stocks in Europe and the euro plunged after a weak opening on Wall Street just as the meeting in the French Mediterranean port of Marseille kicked off.

An Organisation for Economic Cooperation and Development report issued on the eve of the meeting said that a new recession in some rich countries cannot be ruled out and the eurozone crisis could deepen.

The ECB also cut its growth forecasts for the eurozone for this year and next.

International Monetary Fund chief Christine Lagarde, who joined the ministers from Canada, the United States, Japan, Germany, Britain, France and Italy, warned that there could be no foot-dragging about finding ways to boost growth.

“The key message I wish to convey today is that countries must act now — and act boldly — to steer their economies through this dangerous new phase of the recovery,” she said in a speech in London before travelling to France.

The world was suffering from “a crisis of confidence” amid heightened fears over the health of banks and sovereign debt, she said.

“All this is happening at a time when the scope for policy action is considerably narrower than when the crisis first erupted,” Lagarde said. “But while the policy options may be fewer, there is a path to recovery.”

US Treasury Secretary Timothy Geithner said in Marseille that European states needed to do more to prove that they have enough political will to deal with the financial crises roiling the continent.

“They’ve got more work to do in that area,” he told Bloomberg Television.

Geithner said he did not expect any “dramatic” announcement out of the meeting but he did encourage European counterparts to commit to financial reform and “powerful, unequivocal financial force so that governments have time to make those reforms work.”

The IMF’s Lagarde also welcomed Obama’s jobs plan which the president said was aimed at giving a kick-start to the stalled American economy.

The centerpiece of the plan is a deeper-than-expected $240 billion payroll tax cut for employers and employees meant to keep money in the pockets of those most in need, spur demand and encourage firms to hire new workers.

The problems in the US economy — the OECD forecast growth of only 0.4 percent in the fourth quarter — are reflected in most other G7 countries and are helping to cast a long shadow over the stock markets.

In New York, traders said that despite generally good reviews from economists for the jobs stimulus, there was skepticism that it could get past deep divisions in Congress.

EU economic affairs commissioner Olli Rehn welcomed the US package but said that most European governments were more constrained.

“In Europe we have our own challenges which are related especially to fiscal consolidation and restoring confidence into the European economy,” he told reporters in Marseille.

The Marseille meeting comes at a time of high political tension in Europe’s major economies over the debt crisis, with governments having to railroad reform and austerity measures through parliaments against major opposition.

Lawmakers in France, Spain and Italy have all passed legislation in recent days designed to demonstrate their determination to tackle the debt crisis which has racked the eurozone.

Libya’s new rulers have also been invited to the Marseille meeting in a follow-up to the economic support for the so-called Arab Spring announced at a G7 meeting in May.

The fledgling Libyan administration will on Saturday join Tunisia, Egypt, Morocco and Jordan as they explain how they plan to relaunch their economies and hear what help they can expect from the world’s major powers.