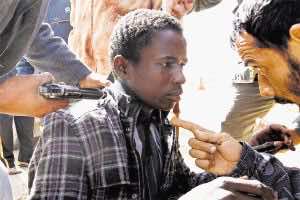 With the liberation of Libya come less happy reports from Amnesty and Physicians for Human Rights of rebels slaughtering scores of black Africans, believing they were all pro-Gaddafi mercenaries. While the dictator did hire some fighters from sub-Saharan Africa, the vast majority of black Africans in Libya are entirely innocent immigrants, one million of whom are guest workers.

According to a Cairo-based think tank, many of the Sudanese being targeted by Libyans are refugees escaping the ethnic cleansing of black Africans in Darfur and the South Kordofan region of Sudan. They have escaped one form of Arab racism, only to find another.

None of this has happened in a vacuum: in 2000 there were deadly anti-immigrant riots in Libya. Nor is there anything unusual about Libyan attitudes: Arab racism toward black Africans is commonplace, even if it remains a taboo subject. For the Nobel Prize winning novelist Wole Soyinka, the unwillingness to confront Arab racism is rooted in the role of Arabs in the slave trade. “Arabs and Islam are guilty of the cultural and spiritual savaging of the Continent,” he writes.

The Ethiopian academic Mekuria Bulcha estimates that Arab traders sold 17 million Africans to the Middle East and Asia between the sixth and twentieth centuries. Yet, there is an almost total reluctance on the part of Arab intellectuals to examine their central role in slavery, past or present.

According to Naiwu Osahon, of the Pan Africa Movement, “Africans are treated like the scum of the earth” throughout the Arab world. He claims that the Arab policy has been “elimination, displacement, separation, marginalization and suppression” of black Africans since the 7th century.

Arguably it continues to this day. Black African guest workers in Egypt, Algeria and Libya tell of being publicly ridiculed and physically assaulted by Arabs. Egyptian writer Mona Eltahawy tells of watching a Sudanese girl being assaulted and tormented on the Cairo Metro, concluding, “We are racist people in Egypt and we are in deep denial.” She makes a wider point, that the Arab world has ignored the suffering of Darfur because the victims are black. “We only pay attention when America and Israel behave badly.”

The Arab League and the Organisation of the Islamic Conference have repeatedly refused to censure totalitarian regimes like Sudan for killing their own black African citizens, even when the victims are Muslims. Their conferences are on safer ground offering routine condemnation of Israel for its treatment of the Palestinians.

The argument goes that Arab and Muslim leaders refuse to criticize their own while they perceive a U.S.-orchestrated crusade (to use George Bush’s ill-advised word) against them. Less acknowledged is the syndrome whereby they embrace their own victimhood and persisting grievance, ignoring atrocities and human rights abuses toward minorities in their own lands.

But there is another reason for Arab indifference to the suffering in Darfur and Somalia. The victims are “the wrong kind of Muslim”; black African, rather than Arab.

In the early 1900s Winston Churchill was appalled to see the Arab Sudanese armed forces using the black African Nuba people for target practice. Nothing has changed, except that now they shoot them from helicopter gunships hovering over the Nuba Mountains where the black Africans citizens have fled. In modern Sudan it is standard practice for those Sudanese who define themselves as Arab to call black African Sudanese ‘abid’ or slave to their faces; the fact that there has been intermarriage for years is ignored.

The Canadian academic Salim Mansur claims: “Blacks are viewed by Arabs as racially inferior, and Arab violence against blacks has a long, turbulent record.”

However, any attempt to confront persistent Arab racism is shouted down by appeals to Arab/African solidarity against the neo-colonialist West. In the words of the U.S.-based Nigerian academic Moses Ebe Ochonu, ‘Black African leaders bend over backwards to accommodate and protect the interests of Arab North Africans.’

But why do black African leaders remain silent about the mistreatment of black Africans in North Africa, the Middle East and Sudan, while obediently condemning the plight of the Palestinians? For the same reason that the African Union (AU), meeting at the end of August, declined to criticise Colonel Gaddafi, even after he had been ousted: he has been paying their personal bills for decades, as well as funding the AU.

For years the African Union, with an annual budget of $250 million, has been paid for by Libya, Algeria, Egypt, Nigeria and South Africa. According to Peter Pham from the Atlantic Council, Libya “habitually pays the dues of members in arrears.”

In addition, Gaddafi has “gleefully bankrolled a good number” of black African leaders, according to the columnist Kofi Aksoh-Sarpong. In the words of a Cameroonian official who preferred to remain anonymous, “A hospital here, a battalion of tanks there, not to mention the Series 500 Mercedes for their personal collections — that’s how the Arabs have manipulated African leaders.” “King Faisal Hospitals turn up in the most unlikely places,” she added.

Curiously, the same people in the West who consider themselves progressive and liberal, are often complicit in refusing to ever mention Arab racism, as if doing so is the same as being an anti-Palestinian Zionist.

Only the delusional would deny that Western racism persists, contributing to the collective failure to stop decades of war crimes against black Africans in Sudan. And only the naïve would argue that electing Barack Obama means America is ‘over’ racism. But slowly Western societies are facing up to their unpalatable past and outlawing racism, at least in statutes if not in their hearts. Let’s hope that the Arab Spring will bring with it a new openness and the self-confidence to shrug off the suffocating cloak of powerless victimhood.