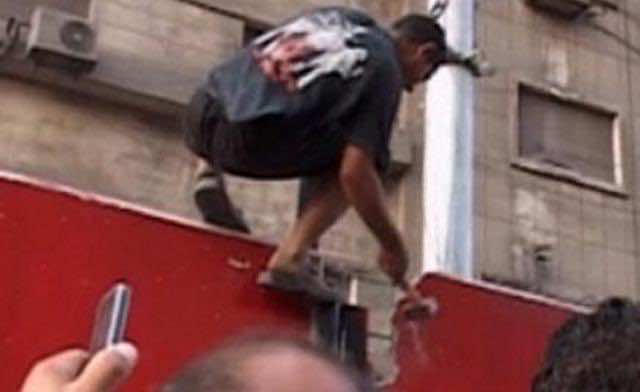 Demonstrators partly destroyed on Friday a wall recently built outside the Israeli embassy in Cairo to protect the building, an AFP correspondent witnessed.

Around 1,000 people had gathered outside the building housing the mission and attacked the wall with hammers and a large metal bar, as military police nearby did nothing to stop them.

They chanted: “Lift your head, you are Egyptian,” according to AFP.

The wall, about two meters (6.5 feet) high, consists of prefabricated cement slabs that were recently installed around the building that houses the embassy overlooking a bridge in Cairo.

Last month, outraged Egyptians staged huge protests outside the embassy and called for the expulsion of the Israeli ambassador over the border deaths of Egyptian policemen killed as Israel hunted militants.

Egypt has asked Israel for an official apology and demanded a probe into the deaths of the five policemen.

During one of the anti-Israeli protests, an Egyptian man scaled the building housing the mission, removed the Jewish state’s Star of David flag and replaced it with Egypt’s colors, as the crowds cheered him on.

Egyptian officials said the wall was intended to protect residents of the high-rise embassy building, not the Israeli mission, according to Reuters.