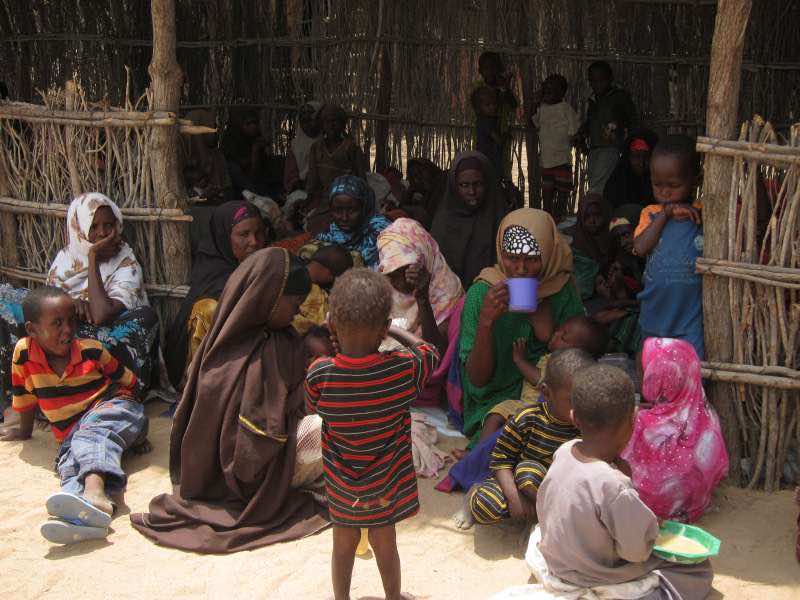 The United Nations reported today that nearly a million more people need humanitarian aid across the drought-stricken Horn of Africa, bringing the total to 13.3 million, while funding to save lives there faces a shortfall of nearly $1 billion.“This [the increase] is largely due to the impact of drought, worsened by high food prices, as well as conflict and insecurity in Somalia,” the UN Office for the Coordination of Humanitarian Affairs (OCHA) said in an update, noting that the estimate of those in need across the four countries – Djibouti, Ethiopia, Kenya and Somalia – was 12.4 million a month ago.

Tens of thousands of Somalis have already died and more than 3.2 million others are on the brink of starvation

UN agencies have for weeks been ramping up their humanitarian efforts across the region especially for Somalis, including hundreds of thousands of refugees from a country that has been torn apart by factional and Islamic militant conflicts for the past two decades during which it has had no functioning central government.

“The situation continues to deteriorate as famine spreads to a sixth region, Bay, in the south of the country,” OCHA said of Somalia, with the number of those in need of aid increasing from 2.4 million to 4 million in the past eight months, 3 million of them in the south, much of which is under the control of Islamic Al-Shabaab militants.

The Horn Africa drought appeal is currently 63 per cent funded, with $1.56 billion received out of the $2.5 billion requested.

The UN World Food Programme (WFP), which is facing a $215-million shortfall in its share of the overall appeal, announced today that is bolstering its nutritional support for malnourished children and mothers across the region, aiming to reach more than 9.6 million people over the coming weeks, an increase of 2.2 million over the 7.4 million it has assisted since July.

In Somalia it is focusing on providing badly needed food over the next three months to 1.9 million people in areas where it has access, an increase of 900,000 over August’s figure.

Overall, access has improved somewhat since Al-Shabaab withdrew from Mogadishu, the capital, last month under pressure from the 6,200-strong UN-backed African Union Mission in Somalia (AMISOM), and the UN refugee agency said today that it was scaling up its presence in the border regions and Mogadishu.

“More than 917,000 Somalis now live as refugees in the four neighbouring countries: Kenya, Ethiopia, Djibouti and Yemen,” UN High Commissioner for Refugees (UNHCR) spokesperson Fatoumata Lejeune-Kaba told a news briefing in Geneva. “Approximately one in every three was forced to flee this year. Altogether, more than 1.4 million Somalis are displaced within the country. This now makes a third of Somalia’s estimated 7.5 million people displaced.”

In the Dollo Ado camps in Ethiopia, the acute malnutrition rate is 50 per cent among newly arrived children under 5 years of age, WFP reported, adding that it is distributing high-energy food.

In Kenya, OCHA reported that some 3.75 million people need food and non-food aid for the next six months at least, up from 2.4 million in January. Failed or poor March-June long rains have culminated in the third failed season in the south-eastern and coastal cropping lowlands and the second in the northern, north-eastern and eastern pastoral areas.

The next rains are not anticipated until October, suggesting food insecurity will continue to deepen if mitigation and response actions are not urgently taken. WFP intends to assist 80,000 vulnerable households with cash transfers.