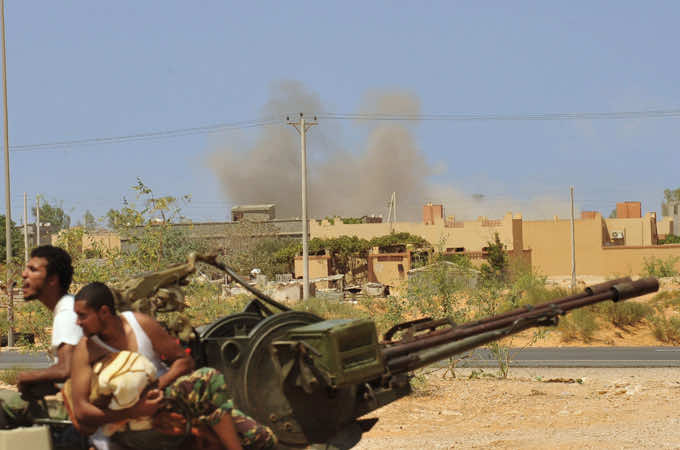 Fighters belonging to the Libyan National Transitional Council (NTC) say they have entered the loyalist stronghold of Bani Walid, with street fighting reported to be taking place in the town, 150km southeast of the capital Tripoli.

Abdullah Kenshil, the former rebels’ chief negotiator, said the former rebels were fighting gunmen positioned in houses in the town of Bani Walid and the hills that overlooked it. “They are inside the city. They are fighting with snipers….They forced this on us and it was in self-defence.”

Revolutionary forces also battled loyalists to the east of Sirte on the Mediterranean coast, but were forced to pull back after taking heavy casualties in close-quarters fighting, a spokesman said.

Friday’s fighting erupted a day before a deadline issued for the loyalists’ surrender.

The NTC has given loyalists in Bani Walid and Sirte until Saturday to give up peacefully or face attack, although previous deadlines have been extended to allow more time for talks.

Ambulances moved back and forth to transfer casualties from near Bani Walid, as NTC fighters grabbed crates of rocket-propelled grenades and mortars and raced to the front.

Kenshil told Al Jazeera earlier on Friday: “I think we are very close. We are pushing further and we hope we can take the city without further fighting.

“But from our experience, they [pro-Gaddafi troops] are fighters – very professional, from different parts of Libya and also mercenaries … once we engage with them they throw down their weapons. There are snipers who shoot at the troops and at civilians,” he said.

“We’ve entered the area from the east, north and south. The deadline is finished. They [pro-Gaddafi troops] finished it.”

Gaddafi’s own location has been a mystery since Tripoli fell to opposition fighters on August 23 after a six-month civil war.

Gaddafi insisted in a defiant audio message broadcast on Thursday that he was still in Libya to lead the fight against what he called the”rats” and “stray dogs” who had taken over Tripoli.

But four of his senior officials, including his air-force commander and a general in charge of his forces in the south, were among a new group of Libyans who have fled to neighbouring Niger, according to officials in Niger.

General Ali Kana, the southern commander, and Ali Sharifal-Rifi, the air force chief, were among 14 Libyans who arrived in the northern Niger town of Agadez on Thursday after crossing the border in a convoy of four-wheel drive vehicles, they said.

A Reuters reporter in Agadez said the four senior men were staying at the luxury Etoile du Tenere hotel, said to be owned by Gaddafi, who stayed there during a Muslim holiday in 2007.

Niger, under pressure from Western powers and Libya’s new rulers to hand over former Gaddafi officials suspected of human-rights abuses, said it would respect its commitments to the ICC if Gaddafi or his sons entered the country.

“We are signatories of the [Hague-based International Criminal Court, or ICC] Rome Statute so they know what they are exposed to if they come,” Massaoudou Hassoumi, the head of President Mahamadou Issoufou’s cabinet, said.

He said the latest arrivals were “under control” in Agadez, through which the head of Gaddafi’s security brigades, Mansour Dhao, passed earlier this week en route to Niger’s capital, Niamey.

“We are taking them in on humanitarian grounds. No one has told us that these are wanted people,” Hassoumi said.

Niger, which only this year returned to civilian rule and is fighting al-Qaeda-linked groups in its desert north, fears the Libya conflict might spill over, Hassoumi said.

“We have prepared for a worst-case scenario, for example if Bani Walid and Sirte were to fall by force, it could cause a massive stampede of armed groups into Niger,” he said.