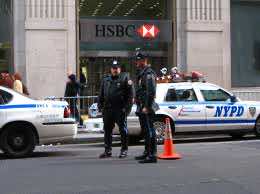 New York police amassed a display of force on Friday including checkpoints that snarled traffic in response to intelligence about a car or truck bomb plot linked to the 10th anniversary of the September 11 attacks.

Officers armed with automatic weapons were stationed at city landmarks including Wall Street, Times Square and the September 11 memorial site where the Twin Towers once stood.

U.S. officials called the threat “credible but unconfirmed” and timed to the anniversary of the hijacked plane attacks that killed 2,995 people in New York, Washington and Pennsylvania.

There was reason to believe threat may be linked to al Qaeda leader Ayman al-Zawahri, a U.S. official told Reuters on Friday, speaking on condition of anonymity.

New Yorkers who have grown accustomed to bag searches at subway stations and random displays of police presence encountered increased vigilance after the threat, which prompted President Barack Obama to order a redoubling of U.S. counterterrorism efforts.

A manhunt was under way for two or three suspects, U.S. officials said on condition of anonymity. One said there could be a link to Zawahri, who took the reins of al Qaeda after Osama bin Laden was killed in May in a U.S. raid in Pakistan.

Near the site known as Ground Zero, where a new World Trade Centre is under reconstruction and Obama will attend Sunday’s commemoration, police established a checkpoint behind the historic Trinity Church, stopping vehicles, opening the cargo bays of trucks and checking drivers’ licenses.

Similar checkpoints went up at Times Square, Columbus Circle on the southern edge of Central Park and outside the Macy’s department store in midtown, creating traffic jams all over Manhattan.

“I think for our safety it is good,” Eva Kurzawska, 57, said as she watched irritated drivers a checkpoint in midtown.

“The commute on the train this morning was horrible but it was worth it because we are being protected,” said Mario Vigorigo, 42, a wireless manager from Brooklyn.

Sam Ginzburg, a senior trader at First New York Securities, said warnings of a potential attack was one factor unnerving traders before the weekend. “There is an extreme amount of negativity,” he said as U.S. stocks fell on Friday.

A senior law enforcement official told Reuters police patrols and security will be stepped up beginning at 3 p.m. EDT (8 p.m. British time) to coincide with the evening rush hour. The operation will involve a “big show of force” which will include teams of officers armed with heavy weapons.

While the rush-hour operation had been planned some time ago, the forces and tactics deployed were increased after authorities received the intelligence threat this week.

“We have to be concerned. Terrorism is theatre and this is a stage, right now probably the world’s biggest stage,” New York City Police Commissioner Raymond Kelly told CNN.

“We have the opening of the 9/11 memorial, the president and two former presidents here, obviously a lot of high profile public officials will be here, so we have to be concerned,” Kelly said.

Vice President Joseph Biden said on ABC’s “Good Morning America” program on Friday morning, “We don’t have the smoking gun but we do have talk about using a car bomb.”

Documents discovered in Osama bin Laden’s compound in Abbottabad, Pakistan, after he was killed in a raid in May by Navy SEALs, highlighted his persistent interest in attacking the United States around the anniversary of the 2001 attacks. But it is unclear if the plans ever evolved beyond aspiration.