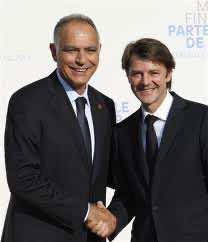 Finance ministers and senior officials from the G7 major economies plus Russia are to extend an assistance partnership set up with Egypt and Tunisia at a May summit in Deauville, northern France, to bring in Morocco and Jordan.

The financing, to support reform efforts in the wake of the Arab Spring uprisings, will be in addition to funding that could be available from the International Monetary Fund.

International financial institutions at the G8 talks are expected to warn of the challenges faced by Arab Spring countries trying to tap external finance while faced with high-risk perceptions and social and financial strains at home.

Officials will likely call for enhanced access to developed country markets for North African and Middle Eastern products and labor to avoid aid dependency and help build up private sector industries, a source close to the talks said.

The G8 meeting was tacked onto the end of a Group of Seven finance chiefs meeting Friday in the Mediterranean port city of Marseille that pledged a coordinated response to the faltering global economic recovery but offered few specifics to appease beleaguered financial markets.

The Deauville initiative was set up under France’s G8 presidency to help North African and Middle Eastern countries swept up in the Arab Spring foster democratic reforms by making aid and development credits conditional on political and economic reforms.

The financing is mostly in the form of loans, rather than outright grants, provided by G8 and Arab countries, the World Bank, multilateral development banks such as the European Bank for Reconstruction and Development (EBRD) and other lenders.

G8 officials were due to endorse the extended Deauville partnership later Saturday after spending the morning discussing the economic challenges faced by countries like Tunisia and Egypt that have ousted autocratic leaders.

Britain would push to ramp up trade and open markets between Europe and North African and Arab states, a Treasury spokesman told reporters Friday.

The EBRD is also taking a lead role in the Deauville partnership as it extends its lending mandate to encompass countries affected by the Arab Spring.