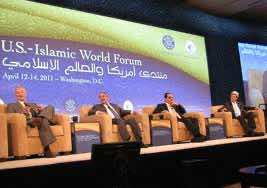 Do we, Arab Muslims, hate the USA? In plain English, do we honestly reflect our inner feelings towards the US when speaking, writing, acting and even demonstrating or are all the behaviors that we show mere formalities, void of any content? The following two situations are among numerous that cogently answer the question.

Each year, the US government launches a number of exchange programs for our professionals and provides various scholarships to our students to study in one of its well-reputed universities to acquire knowledge, interact with westerners and experience a fruitful and critical academic and personal experience. However, instead of rollinging up their sleeves and putting their minds to their studies and workshops, they prefer to find a job and settle there illegally instead of going back home and imparting their acquired knowledge to colleagues, friends and in turn serve their poor country.

The second scenario is the latest American atrociousness in Afghanistan and Iraq and the brutal Israeli policies towards the besieged Gaza strip, which uncovers a huge paradox in the Arab Muslim disposition. I have witnessed people that are powerless to carry out any reactive act towards the US and Israel aggression, except to organize demonstrations in streets and raise their arms before the Almighty God in gesture of supplication, wishing the US and its allies horrendous calamities and a terrible deterioration. But once they finish up their prayers, they leave the mosque and head towards the nearest cyber café where they can apply for a Green Card. When they finish with the application procedures, they turn back to God again, imploring Him to be selected for the Lottery and, thus, make their dream of going to the US come true.

I really wonder which request that God, the Almighty, will fulfill. Is it the first to destroy the US or the second to improve and ameliorate their lives via moving to the US? Religiously speaking, I think it depends on the person’s faith, determination and credibility. To put it in a nutshell, when was the person more faithful? Is it when they were an applicant or supplicant?

Manifestations of backwardness in the Arab world and the mediaeval circumstances that we can see all around us exhort us to ask whether the problem with the Arab world is external or internal. Is it foreign interference, aggression and occupation that are holding us back? Or are we hostages to the backwardness of our own sociopolitical and economic structures? I admit that both causes are taking their toll on the region. We shook off colonial rule quiet a long time ago; though, we are still lagging behind while countries such as China, Brazil, Korea, and India that underwent all kind of exploitation on a much larger scale than we did, managed to catch up with the rest of the world with remarkable virtuosity.

We should feel a shame to attribute our backwardness to the US and Western aggression when knowing that Mexicans, who suffer the malaise of living next door to an international giant, are envying us for our geographical location insomuch that a Mexican writer once wrote “How sad are you Mexico, so far from God and so close to the United States.”

Let us acknowledge that it’s our backwardness that made us easy prey for avaricious outsiders to take advantage of us. When musing over the supremacy of the US and the helpless state of the Arab world, I usually provoke the scene of a strong starving lion along with its cubs only a few meters away from a silly fleshy gazelle and you know the rest of the story. In the world of humankind, the end may seem the same but the means sometimes can be violent, other times diplomatic. The United States’ relations are governed by interest and nothing but the interest of its giant companies and its people.

Feelings of belligerency, hatred and the inflammatory polemics caused by the American wars on Afghanistan and Iraq generate an insistent belief that they were wars on Islam and justifications of fighting terrorism or putting an end to dictatorship in the region are mere pleas to destroy Islam.

*Mahmoud Seddik is a contributor to Morocco World News. He also has his own blog: www.mahmoudsadik.blogspot.com