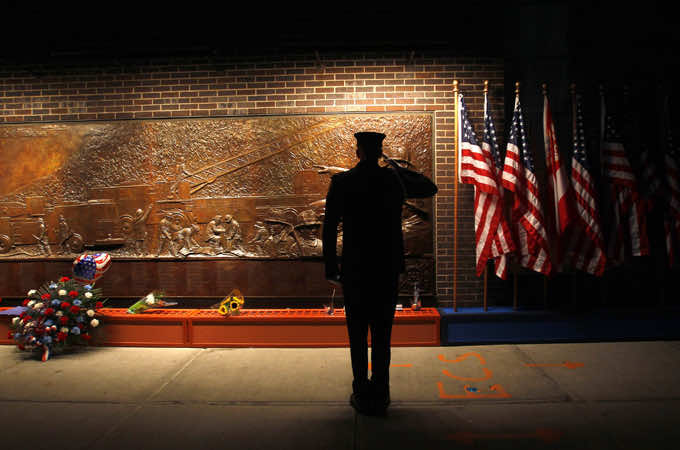 Obama and Bush set to attend ceremonies in New York and at other crash sites 10 years since hijackers killed thousands.

Commemorative events have begun in the US to mark the 10th anniversary of the September 11, 2001, attacks and pay tribute to the thousands who died on that day.

US President Barack Obama on Sunday arrived in New York, where hijackers flew airliners into the twin towers of the World Trade Center, to visit the Ground Zero site.

He will also visit the Pentagon, also targeted by hijackers, and Pennsylvania, where a fourth passenger jet crashed into the ground near the town of Shanksville.

Obama will later deliver a speech at a memorial event for the victims in Washington, the capital.

George W Bush, the former president who was in office 10 years ago, will join Obama in New York for a memorial ceremony at the side of the World Trade Center shortly before 8.40am local time, when the first tower was struck.

Moments of silence will be observed for each of the times that the four planes crashed, and the two times when the World Trade Center towers fell.

Speakers at the event will read out the names of the almost 3,000 people who were killed in the attacks.

The ceremony will also mark the public opening of two memorial pools on the former footprints of the two World Trade Center buildings.

On the eve of the anniversary, Obama visited a soup kitchen in Washington where he served trays of rice and gumbo to some of the city’s poorest citizens.

Obama said projects to serve the community were “part of what the spirit of remembering 9/11 is all about; the country being unified and looking out for one another”.

Earlier, in an internet address, Obama said the US had grown stronger since the attacks: “Thanks to the tireless efforts of our military personnel and our intelligence, law enforcement and homeland security professionals, there should be no doubt: today, America is stronger and al-Qaeda is on the path to defeat.”

Meanwhile, in Shanksville, Joe Biden, the vice-president, and former presidents Bush and Bill Clinton, were present at a sombre ceremony honouring the passengers and crew of hijacked Flight 93.

They were accompanied by relatives of the 40 victims of the crash. Speakers at the dedication of the $62m Flight 93 National Memorial also included Gordon Felt, the president of the Families of Flight 93 group.

Felt’s brother Edward had been on board the flight, and had telephoned a friend from on board to report that the flight had been hijacked.

A white stone wall, bearing the names of those who struggled with the hijackers on the Boeing 757 airliner during the attack, was unveiled in the rural Pennsylvania field where the plane crashed.

Praising those passengers, Clinton said at the ceremony that they “gave the country an incalculable gift” when they saved many lives by foiling the “terrorist attack”.

Meanwhile, US authorities boosted security presence and tactics across New York and Washington in response to a credible but unconfirmed threat of an al-Qaeda plot to attack the cities on the anniversary.

Police set up random check points, searched vehicles and stepped up surveillance of transport stations across the city amid security alerts over a potential car bomb attack.