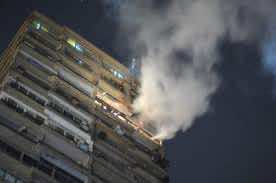 The coalition called the “Egyptian Youth of the Revolution” declared its condemnation of the storming of the Israeli embassy in Cairo.

The coalition attributed this event to what it called “the provocative actions by the government” that built a barrier wall in front of the Israeli embassy which gave the impression to the masses of Egyptian people that Israel metaphorically “occupied the land of Egypt”, a move regarded by many as an attack on the freedom of the Egyptians.

The Facebook page “We are all Khaled Said”, which had a key role in initiating the Egyptian revolution, has condemned the attack on the Israeli embassy saying that it’s a “childish act.”

The webpage which has more than 1,600,000 members and fans said that although it’s the embassy of the “Zionist enemy”, these acts are not one of the revolution’s goals and “will drag us to internal and external issues and may cause the suppression of the revolution”.

Clashes erupted outside the Israeli embassy in Cairo after demonstrators broke down the wall that was built around the building housing Israel’s embassy and tried to enter the embassy. 1049 people were injured and three were dead.