September 11, 2011Hundreds of Moroccans have taken to the streets in several cities to renew their call for social justice and fighting corruption.The protest rallies were held in the major cities of Tangier, Rabat and Fes on Sunday. 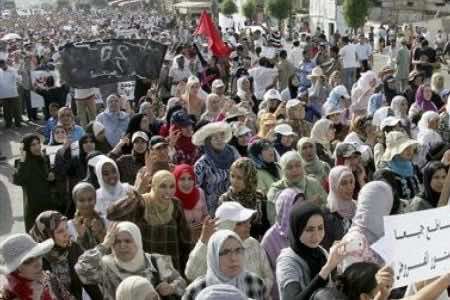 By
Staff Writer
-
Sep 11, 2011
Spread the love
September 11, 2011
Hundreds of Moroccans have taken to the streets in several cities to renew their call for social justice and fighting corruption.

The protest rallies were held in the major cities of Tangier, Rabat and Fes on Sunday.

The demonstrations are waged several months after the Moroccan ruler King Mohammed VI proposed reforms in the North African country in an effort to prevent the Arab Spring wave from jeopardizing his Western-backed monarchy.

The reforms included the election of the prime minister by people, formerly appointed by the king himself, as well as transferring some of the monarch’s powers to the parliament.

However, the king will still remain the head of state and the military as well as the highest religious authority in the country.

More than 98 percent of voters supported the reforms in a referendum on July 1.

Moroccans have since held several demonstrations against the changes, describing them as window-dressing and demanding further limits on the king’s powers.

Last month, Moroccan government announced that the country’s parliamentary elections would be held in mid-February.

A member of the largest party elected to the parliament is to be picked as the country’s prime minister.