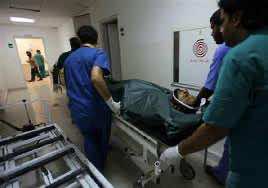 Muammar Gaddafi loyalists attacked an oil refinery on Monday, killing 15 guards, in an apparent attempt to disrupt a drive by Libya’s new rulers to seize the ousted leader’s last bastions and revive the oil-based economy.

Witnesses said the assailants damaged the front gate of the refinery, 20 km (13 miles) from the coastal town of Ras Lanuf, but not the plant itself, which is not fully operational.

About 60 staff were at the refinery at the time of the attack, according to one of two wounded survivors at a hospital where the dead were also taken. Blood stained the floor.

Refinery worker Ramadan Abdel Qader, who had been shot in the foot, told Reuters gunmen in 14 or 15 trucks had come from the direction of the Gaddafi-held coastal city of Sirte.

“We heard firing and shelling at around 9 in the morning from Gaddafi loyalists,” he said. Staff had been asleep.

The assault occurred only hours after Libya’s National Transitional Council (NTC) announced that it had resumed some oil production, which had been all but halted since anti-Gaddafi protests turned into civil war in March.

NTC forces, which seized Tripoli on August 23, said they were meeting fierce resistance on the fourth day of fighting for the Gaddafi-held desert town of Bani Walid, 150 km (95 miles) southeast of the capital, but were edging towards Sirte.

As pressure builds on Gaddafi’s last strongholds, some of his top officials and family members have fled abroad — including his son Saadi, who arrived in neighbouring Niger on Sunday after crossing the remote Sahara desert frontier.

The NTC has said it will send a delegation to Niger to seek the return of anyone wanted for crimes, but Jalal al-Galal, a council spokesman, said the visit had not yet been scheduled.

“We want to take the necessary legal steps to give us possibility of obtaining the detention and extradition of anyone we are seeking,” he said, adding that time was needed to prepare the paperwork to satisfy international legal norms.

Niger, like Algeria which last month took in Gaddafi’s wife and three of his children, has cited humanitarian reasons for accepting fugitives from the former government.

But Niamey has promised to respect its commitments to the International Criminal Court, which wants to try Gaddafi, his son Saif al-Islam and intelligence chief Abdullah al-Senussi for alleged crimes against humanity.

The departure of Saadi, who had at one stage offered peace negotiations with the NTC, leaves Gaddafi, Saif al-Islam and two other hardline sons, military commanders Muatassim and Khamis, as the most prominent figures still at large. Another son, Saif al-Arab, was reported killed during the war.

Reuters reporters saw Dorda, a former prime minister who ran Gaddafi’s external spy service, held by a group of about 20 fighters in a house in the capital’s Zenata district.

A lanky figure in safari jacket and slip-on shoes, Dorda was sitting on a sofa and was not physically restrained, but an armed guard sat beside him. When a fighter asserted that he had killed people, he replied: “Prove it.”

Families trapped in the besieged town for weeks fled after Gaddafi forces abandoned some checkpoints on the outskirts. Dozens of cars packed with civilians streamed out of the area.

“We are leaving because of the rockets. They are falling near civilian homes,” said one resident, Ali Hussain.

The NTC, which promised on Sunday to unveil a new, more inclusive government in seven to 10 days, says it will not declare Libya “liberated” until it has taken control of towns still in the hands of Gaddafi loyalists.

It has sent additional brigades to Bani Walid, but some fighters there said this had only worsened tribal tensions.

“Our fighters are from all over Libya. There was little control over them yesterday. Today we will control them better,” said NTC commander Mohamed el-Fassi, adding that five NTC fighters were killed and 14 wounded in Sunday’s clashes.

“We believe there are traitors among them,” said Mohammed el Gahdi, a fighter from the coastal city of Khoms.

“When our forces entered Bani Walid they found the brigades of Gaddafi using citizens as shields,” he told reporters. He said Gaddafi fighters had put missile launchers on the roofs of houses with civilian families inside, making it impossible for NTC forces or their allied NATO warplanes to strike.

The United Nations says it is worried about the fate of civilians trapped inside the besieged pro-Gaddafi towns.

“Our big concern right now is Sirte, where we are receiving reports that there’s no water and no electricity,” U.N. humanitarian chief Valerie Amos told Reuters in an interview.