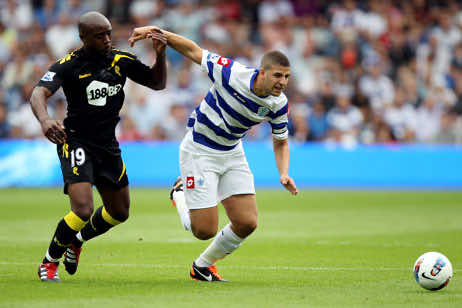 Queens Park Rangers could give debuts to five seasoned Premier League players on Monday night, yet all eyes will be trained on Adel Taarabt, the team’s outrageously-gifted captain, to see if he can start justifying the hype surrounding him.

In terms of natural ability, the 22 year old from Morocco is comparable with the likes of David Silva, at Manchester City, and Nani, the Manchester United winger.

“I’ve never seen anybody with ability like his,” Neil Warnock, the QPR manager, said last year. “Taarabt is a breath of fresh air.”

The season may still be very much in an embryonic stage but Taarabt’s underwhelming displays in his team’s first three games have left many wondering why the club did not accept the £13 million (Dh75,832m) Paris Saint-Germain, the Qatar-owned French club, offered in the summer for his services. Yet, Taarabt has the perfect platform to strut his stuff under the lights at Loftus Road tonight. The presence of Joey Barton and Shaun-Wright Phillips, the new recruits, should take some of the limelight and pressure away from him.

“He’s clearly an unbelievable talent,” Tommy Smith, his teammate, said. “He is the kind of player who does nothing for 85 minutes, gives the ball away and does not look as good as people say and then produces a bit of magic to win the game.

“Players like that are worth their weight in gold. He is the best player I have had the pleasure of playing and training with, no doubt.”

Armed with the finances of Tony Fernandes, the Malaysian businessman who recently purchased the club, Warnock spent heavily in the final days of the transfer window, bringing in Wright-Phillips, Barton, Anton Ferdinand, Luke Young and Armand Traore.

Yet, his best piece of business remains the reported £1m he managed to persuade Tottenham Hotspur to accept for the former France youth international in August last year.

“If he could put the teamwork into his game, the sky’s the limit,” Warnock said. “That’s why I spent so long to make sure he signed.”

Warnock has managed to harness the considerable talents of Taarabt, albeit in the second tier of English football last year. The QPR manager is one of the game’s most colorful, outspoken and passionate characters. He is revered by the fans of clubs he manages – he has been in charge of 12 English teams – yet also riles the supporters, players and, sometimes, the managers of opposing teams. Warnock and Wally Downes, the then Reading coach, almost came to blows on the touchline in 2007. Warnock is like Marmite – you either love him or loath him.

“I can understand the Marmite comparison because, as a player, I used to hate playing against his team,” Smith said. “But once you meet him, and work for him, you realize he’s nothing like the man you see on the outside. He’s laid back and his door is always open.”

Warnock tried to sign Smith twice before eventually landing him last year. “[Warnock] has mentioned that and said he rarely gives a player three chances, so he must like me,” Smith said.

QPR will hope Smith is not an unlucky omen; he has been relegated from the Premier League three times. “Not too many people realize that and it’s just as well as you don’t want to get tarred with that brush. I don’t want it to be four this season.”