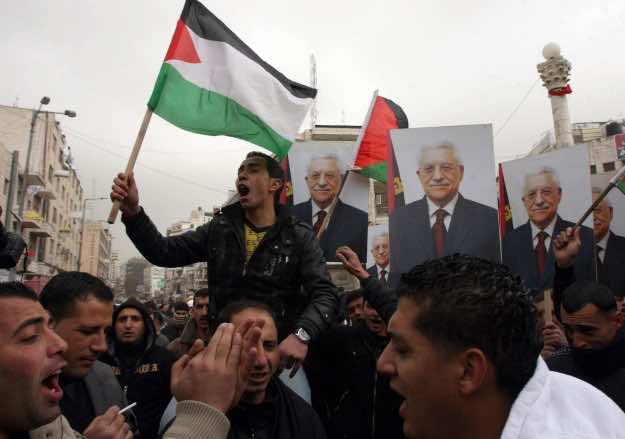 JERUSALEM — Many Israelis are dismissing the Palestinians’ efforts to win international recognition of their independence at the United Nations this month as merely symbolic.

But the Palestinians hope the high-profile maneuvering, on a grand global stage, might yield results that have eluded them through decades of peace talks, popular uprisings and violence campaigns.

Palestinian President Mahmoud Abbas is set to address the U.N. next week, planning to ask the world to recognize a Palestinian state.

The path to full membership seems blocked because it goes through the Security Council, the powerful 15-member body where the United States _ still urging the Palestinians to back down _ promises a veto. But the General Assembly, meeting next week in New York, seems likely to recognize Palestine as a nonmember observer state. This status, identical to that of the Vatican, requires only a simple majority of its 193 members.

Formally, General Assembly recognition would be mainly declarative. But in the Middle East, especially at this time, events could quickly spiral out of hand. The Palestinian gambit could have far-reaching consequences.

While it’s impossible to predict how things will unfold, here’s a look at some of the possible scenarios:

Israelis fear a return to the violence that typified the first half of the previous decade, when Palestinian suicide bombings and Israeli retaliations were the order of the day. Israeli media have warned of mass marches into Jerusalem, the besieging of Jewish settlements in the West Bank, the storming of borders and attacking of army checkpoints.

The Palestinians do plan demonstrations to coincide with the diplomatic activity, but they insist all will be peaceful and dismiss Israel’s fears, accusing it of heating up the atmosphere to discredit their efforts.

A senior Palestinian security official said the Palestinian president had given clear orders to prevent any friction with the Israelis at checkpoints and settlements.

The PLO has formed a special committee to oversee the “field activities” but it does not include Hamas, the militant group that since 2007 has run the Gaza Strip, a coastal strip that has been a launching pad for persistent rocket fire at Israel.

Israeli authorities also fear that unofficial activity, even a provocative act by a lone individual, could spark wider violence. Israeli security forces have been training and stockpiling riot-control equipment in anticipation of trouble.

Senior Palestinian official Nabil Shaath says the Palestinians would use their upgraded status to seek full membership in U.N. bodies like the World Health Organization, UNESCO, and the International Court of Justice. That’s usually limited to full member states, raising the possibility of a challenge in each case.

“That will make life difficult for Israel because we will have to fight each one,” said Alan Baker, a former legal adviser to Israel’s Foreign Ministry.

Shaath said the Palestinians will also appeal to the International Criminal Court “to protect our people from the Israeli crimes.”

That court allows cases against individuals, whether members of the military or government. Although Israel _ like the United States _ is not a member, 116 countries, including most of Europe, are. Israeli soldiers or officials could face threat of arrest in any of them.

Former Israeli U.N. ambassador Gabriella Shalev also predicted a steadily increasing level of harassment for Israel _ including possible economic sanctions, snags in trade agreements, and an increasing number of universities becoming inhospitable to Israelis. The flip side: A report from the Association for Civil Rights in Israel noted that if the Palestinians join international conventions on torture, the rights of the child and the rules of engagement in war, they may themselves be exposed to charges by Israeli victims of suicide bombings, rocket barrages or other attacks.

ISRAEL’S FREEDOM OF ACTION IN GAZA

Israel claims it has no obligations to Gaza because its military occupation officially ended when in 2005 it unilaterally removed all settlers and soldiers from the coastal strip.

But Israel maintains control of most points of entry and airspace, and blockades it from the sea in a policy meant to keep Hamas government in check.

In response to attacks or threats, it bombards Gaza more or less at will, regularly killing militants but leaving considerable collateral destruction in its wake.

This arrangement will be much more difficult to sustain once the General Assembly has recognized Gaza to be part of a state, even if one that is a nonmember.

Israeli Cabinet Minister Gilad Erdan said Israel has not yet decided how to react. But officials acknowledge they have a wide range of options.

Some hard-line Likud members have said Israel should annex the West Bank in response to a Palestinian declaration of independence.

Others have urged at least a partial annexation as well, perhaps of areas close to the pre-1967 frontiers where most settlers live. This is not likely anytime soon either, because the world reaction would be so hostile.

But more conceivable are steps it has enacted in the past, such as withholding Palestinian tax and customs monies that Israel collects on behalf of the Palestinians.

Israel could ratchet up such tactics, or hamper Palestinian freedom of movement, or step up settlement building in areas of the West Bank it most badly wants to keep.

Palestinian officials occasionally rattle a saber right back: Should Israel push things too far, they could dismantle the Palestinian Authority, the autonomy government established under interim peace accords two decades ago. That would leave the Jewish state responsible for the welfare and policing of millions of unwanted Palestinian subjects.

International recognition might give the Palestinians just enough confidence to try their hand again at talks. Prime Minister Benjamin Netanyahu has been offering this, but refuses their condition of a freeze on settlement-building. At the heart of the impasse has been a lack of faith on either side that a deal is reachable.

The Palestinians hope that with recognition behind them, the world will pressure Israel more seriously to agree to their terms of a near-total pullout from the West Bank and east Jerusalem.

Israeli officials fear international recognition of the Palestinian position will make the Palestinians intransigent in any future talks, decreasing the chances of success.

New talks aren’t likely with the current Israeli government, but concern is rising in Israel about its isolation and mounting tensions with countries like Egypt, Turkey and even the United States.

Enough pressure could compel Netanyahu to jettison his nationalist coalition partners and ask the moderate Kadima opposition to form a government that will be more aligned with world opinion, and perhaps more amenable to the Palestinians. Public opinion could compel Kadima to agree, even though its leaders would far prefer to bring Netanyahu down.

Although this would likely not yield peace on the Palestinians’ terms, it could create an Israeli government more inclined to seek creative solutions.