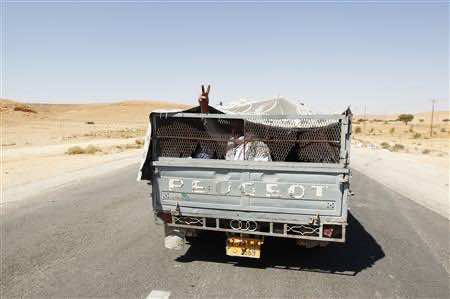 RAS LANUF/TRIPOLI  – Libya’s interim leader has made his first public speech in Tripoli, warning against reprisals after loyalists of the ousted Muammar Gaddafi struck out at the revolutionaries pursuing them.

In an apparent attempt to disrupt a drive by the ruling National Transitional Council (NTC) to seize the ousted leader’s last bastions and revive the oil-based economy, the pro-Gaddafi fighters killed 15 guards at an oil refinery on Monday.

Despite the attack, NTC chairman, Mustafa Abdel Jalil, felt confident enough to address a crowd of about 10,000 people and used the speech to call for restraint.

“We seek a state of law, prosperity and one where sharia (Islamic law) is the main source for legislation, and this requires many things and conditions,” he said, adding that “extremist ideology” would not be tolerated.

A Syrian-based television station said it would soon broadcast another message from the fugitive Gaddafi, who has issued regular battle calls to his followers in the three weeks since Tripoli was overrun.

Witnesses to the refinery attack said the assailants damaged the front gate of the facility, 20 km (13 miles) from the coastal town of Ras Lanuf, but not the plant itself, which is not fully operational.

Refinery worker Ramadan Abdel Qader, who had been shot in the foot, told Reuters that gunmen in 14 or 15 trucks had come from the direction of the Gaddafi-held coastal city of Sirte.

The assault occurred only hours after the NTC announced it had resumed some oil production, which had been all but halted since anti-Gaddafi protests turned into civil war in March.

The interim council is struggling to assert its control over the entire country and capture a handful of stubbornly defended pro-Gaddafi towns.

“We need to open the courts to anyone who harmed the Libyan people in any way. The judicial system will decide,” he said, calling on NTC fighters to respect that.

Many senior NTC officials also see scooping up Gaddafi and the members of his family who are still on the run as crucial to finally declaring victory in the seven-month old war.

Gaddafi’s son Saadi arrived in neighbouring Niger on Sunday after crossing the remote Sahara desert frontier. On Monday the U.S. State Department said that the government of Niger had confirmed to it that it intended to detain the former soccer player.

But a Nigerien government spokesman told Reuters that Saadi Gaddafi was only being watched for now.

“Nothing has changed in the government’s position. There is no international search for him. Like the others he is just under surveillance,” the spokesman said, referring to other Gaddadfi loyalists who have recently fled to Niger.

Two other sons and Gaddafi’s only biological daughter have fled to Algeria. One son is reported to have died in the war and three others are still on the run.

The NTC has said it will send a delegation to Niger to seek the return of anyone wanted for crimes.

Niger, like Algeria, has cited humanitarian reasons for accepting fugitives of the former government, but has promised to respect its commitments to the International Criminal Court, which wants to try Gaddafi, son Saif al-Islam and intelligence chief Abdullah al-Senussi for war crimes.

NTC forces, which seized Tripoli on August 23, said they were meeting fierce resistance on the fourth day of fighting for the Gaddafi-held desert town of Bani Walid, 150 km (95 miles) southeast of the capital, and were edging towards Sirte.

Libya’s economy is almost entirely dependent on oil, and restarting production is crucial to restoring the economy. Interim Prime Minister Mahmoud Jibril said on Sunday some oil production had resumed, but would not say where or how much.

Libya holds Africa’s largest crude oil reserves and sold about 85 percent of its exports to Europe under Gaddafi. Western oil firms, including Italy’s Eni and Austria’s OMV, are keen to restore production.

Families trapped there for weeks escaped after Gaddafi forces abandoned some checkpoints on the outskirts. Dozens of cars packed with civilians streamed out of the area.

“We are leaving because of the rockets. They are falling near civilian homes,” said one resident, Ali Hussain.

The United Nations says it is worried about the fate of civilians trapped inside besieged pro-Gaddafi towns.

“Our big concern right now is Sirte, where we are receiving reports that there’s no water and no electricity,” U.N. humanitarian chief Valerie Amos told Reuters in Dubai.

The NTC has sent extra units to Bani Walid, but some fighters said this only worsened tribal tensions between fighters from other areas and those from the town.

“Our fighters are from all over Libya. There was little control over them yesterday. Today we will control them better,” said NTC commander Mohamed el-Fassi.

He said five NTC fighters were killed and 14 wounded in Sunday’s clashes.

Some NTC combatants said they suspected local fighters of the Warfalla tribe, Libya’s largest, of passing tips to Gaddafi forces in Bani Walid. “We believe there are traitors among them,” said Mohammed el Gahdi, from the coastal city of Khoms.

“When our forces entered Bani Walid they found the brigades of Gaddafi using citizens as shields,” he said, adding that missile launchers had been placed on the roofs of homes, making it impossible for NTC forces or NATO warplanes to strike.