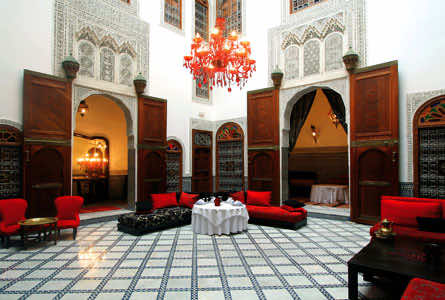 Fez – I have decided to go to Morocco. Yes, Morocco. “Why Morocco of all places?” is a question that I have heard a million times since I decided to go. For some time I have been thinking about traveling to a foreign country to teach English as a second language. I have just graduated with my Master of Arts, but there is no work for me here because so many teachers have lately been dismissed from their positions. I have little formal experience but the market is glutted with many teachers who have years of experience. So I resolved to travel abroad to teach in a language institute for a time in order to improve my resume and gain some very valuable experience. After having decided to embark on this adventure, I considered traveling to many places. I considered South America, Asia, and Europe. They all have points which recommend them but still I was not satisfied with any of those places.

The question which I was continually asking myself was “What country has the most to teach me?” I wanted not just to go somewhere to teach, but to also be taught. Europe was the first part of the world to be struck from my list.

The United States is not much more than a European transplant. I would learn some things living in Europe, but on the whole Europe is not terribly different from the United States. I considered South America but in the end, it is the same. While there are definite cultural differences between North and South America, I simply did not feel drawn there. I thought about Asia and while I think it would be interesting to visit some of the Asian countries, I am still not sure that I wish to live there.

Throughout the entire time that I was deliberating on this decision, I was thinking about Islam and the Islamic world. I began to think that perhaps that part of the world has things to offer to me that these other places do not. Why, after all, would I want to live in a country that is similar to my own? America is largely a Christian country and Christianity permeates the culture so I must go somewhere different.

Since September 11, 2001, Islam and Muslims are widely discussed in America. Islam is the subject of many debates and discussions. I decided that it would be best for me to go to an Islamic country. If I can go to work and live among Muslims, then I know I can learn about their true way of life and their true beliefs. I am not interested in Islam as it is depicted on television or Islam as it is depicted in a book, I want to go to a place where Islam is life.

Then I can see it not in books and films, but in the streets and markets, academies and homes.  So then I had to decide which Muslim country I should consider.

At this present time there are some countries that I could not consider visiting as an American because of our wars and other issues, so a few places were eliminated straightaway. I began to think more and more about North Africa.

That region is especially appealing not only because I speak some French, but because the people there have a reputation for tolerating Americans a bit more than some other Islamic areas. There are many countries across North Africa, but what caused me to choose Morocco?

At the same time that I was deliberating about travel and work overseas, I enlisted in a pen pal directory. I was soon corresponding with people from all around the world, but I found that I began to gravitate more and more toward Moroccans. They all seemed very kind and very friendly. One thing that quickly stood out to me was their readiness to accept me as a Christian.

This came as a great surprise to me as I had always been led to believe that Muslims do not like Christians.  When I told them that I am a Christian and that I desire to learn about Islam, they were all very gracious and willing to teach me. I had many very good and very stimulating letters from my Muslim Moroccan friends. They were always patient with me and strove to answer my questions but they were also sincere enough to point out to me what seemed to them to be flaws in my own religion.

This of course was what I wanted. I wanted to understand them. I wanted to see things from their point of view. As I continued to correspond with them, I soon began to admire Islam and its principles. These Muslim friends of mine are among the most pious and sincere people I have ever known. How much better would it be to sit with them in person to eat together and to exchange ideas? If I can learn so much from their letters, then I am sure I will learn much more from their lives and from their friendship. It was these first encounters with Muslims that caused me to decide to go to an Islamic country. If I can go and live among people such as they, then I am sure it can only make me a better person. Not only that, but with such experiences I can then return to my own country with firsthand knowledge and strive to restore the reputation of these good people which has been so damaged by a few deranged maniacs.

*Jess L. Norton is a contributor to Morocco World News. He lives in Fez, Morocco.