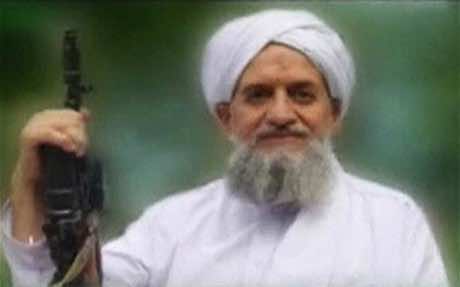 Al-Qaeda has released a video applauding the Arab Spring uprisings to mark the anniversary of the 9/11 attacks.

Ayman al-Zawahiri, who took control of al-Qaeda after the killing of Osama bin Laden, said he hoped the revolutionaries would found Islamic states and embrace Sharia Law.

The video was released as many analysts believe the terror network is struggling to cope with the loss of a string of leaders and has found its jihadist message undermined by popular protests against authoritarian regimes which have swept the Middle East.

During a long speech, al Zawahiri said al Qaeda supported the uprisings as “a form of defeat for the United States” according to SITE Intelligence.

Al Zawahiri said: “America is denying the fact that it is not facing individuals or groups but the whole ummah [Muslim community] of Islam

“After the martyrdom of Sheikh Osama, the Islamic face of the revolutions was shown,” he said.

“America’s arrogant nature will push it to deny the facts that it is facing a rising ummah and that it may be a cause of defeat and its fall, with permission from Allah.”

Al-Zawahiri has led al Qaeda since Bin Laden was shot dead after a decade on the run during a raid by United States Navy SEALs on his Abbottabad hideout in May.

A string of senior leaders have been killed or captured since then, leading Leon Panetta, new US defence secretary, to predict defeat of the network was within reach.

The film showing bin Laden was footage captured in the Abbottabad raid according to SITE.