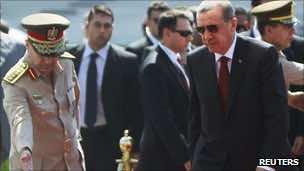 Turkish PM Recep Tayyip Erdogan has said that recognition of a Palestinian state is an obligation not an option.

He told the Arab League that before the year’s end “we will see Palestine in a very different situation”.

Mr Erdogan made a new attack on Israel, saying its government’s mentality was a barrier to peace in the Middle East.

The Palestinians are currently preparing a bid for United Nations membership despite Israeli and US opposition.

Mr Erdogan is in Egypt as part of a tour of three Arab states that recently ousted their leaders, in an attempt to improve Turkey’s standing in the region.

Turkey’s relations with Israel have worsened since Israeli forces boarded an aid ship in May last year as it was heading for Gaza.

Nine Turkish activists were killed during the raid. Israel has refused to apologise and said its troops acted in self-defence.

The Turkish leader, who has won popularity among Arabs for his denunciations of Israel, was earlier met by an enthusiastic crowd in Cairo.

Mr Erdogan called for support for the Palestinians’ attempt to achieve recognition at the UN.

“We must work hand in hand with our Palestinian brothers. The Palestinian cause is the cause of human dignity,” he told a foreign ministers’ meeting at the Cairo headquarters of the Arab League. His remarks were broadcast live on Egyptian TV.

He accused Israel of behaving like a spoilt child and building a blockade round its own people through its policies.

“Israel will break away from solitude only when it acts as a reasonable, responsible, serious and normal state,” he said.

The BBC’s Jonathan Head in Cairo says that, while there were no new threats in the speech, it was fiery enough to sustain Mr Erdogan’s reputation as a champion of ordinary people in the Arab world without alarming Arab governments that have resisted change.

The Turkish prime minister made an appeal for freedom and democracy in the region.

“The legitimate demands of the people cannot be repressed with force and in blood,” he said.

“Freedom and democracy and human rights must be a united slogan for the future of our people.”

Meanwhile in a newspaper interview published on Tuesday, Mr Erdogan warned of possible civil war between majority Sunni Muslims Alawites and Sunnis in Syria, where more than 2,500 people have died in pro-democracy protests since March.

Mr Erdogan’s tour will continue with a visit to Tunisia, where the popular overthrow of President Zine al-Abidine Ben Ali in January sparked similar movements across the region, including Libya.

Mr Erdogan has said he will not attempt to carry out his plan to travel to Gaza from Egypt during this trip, but hopes that he can travel there in the near future.