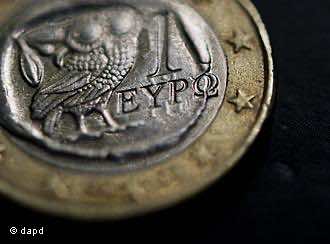 As talk of a Greek default on its giant debt gains momentum, politicians and economists are weighing up the options. What would be the potential fallout, if the Greek state was to become bankrupt?

It would not be the first time that a state has gone bankrupt – Argentina defaulted on its debt in 2002 and had to go through drastic restructuring. However, never before has a country within a monetary union been threatened with bankruptcy. In Greece’s case, a monetary union where other countries are also seriously in debt, and where a rescue package for 110 billion euros has not been enough to plug the deficit.

There is no historical precedent for such a case. This explains why Germany’s Finance Minister Wolfgang Schäuble is asking his experts to work out the possible scenarios, in the hope that this makes matters a little clearer.

All the talk about the imminent collapse of the financial markets fuels uncertainty – therefore making bankruptcy a self-fulfilling prophecy. Germany’s Economy Minister Philip Rösler recently made a daring admission, saying that bankruptcy should be an option for addressing Greece’s debt problems. He wrote in the newspaper Die Welt on Monday that there should be no more taboos and “we must not take anything off the table in the short run.”

The reaction of the markets was clear: Across Europe stock prices tumbled, the German index DAX fell below 5000 points to its lowest level for two years, and the euro fell against the dollar.

“German officials are seemingly in destructive overdrive, as per all the public talk of preparing for a Greek default and even a Greek euro exit,” said Marc Oswald, market strategist at Monument Securities in London. “Markets can hardly be blamed for the latest charge for the bunker and tin hats,” he added.

It certainly looks as if they’ll need that kind of protection, because in the event of bankruptcy, large chunks of the money that Greece has already borrowed would be lost.

Eurozone countries have lent Greece billions and if this money vanished, the debt of the euro countries would increase accordingly said Stefan Homburg, chief of the Financial Research Institute at the University of Hanover.

If Greece can no longer handle its debt, “then Germany’s debt will suddenly rise, passing the debt limit, and Germany’s credit rating will be affected,” said Homburg.

Germany would in turn have to pay higher interest on its new debt. While this itself would not be a drama for Germany, already troubled countries like Portugal, Ireland, Italy and Spain could struggle with higher interest rates.

Greece’s financial collapse would put several banks in danger. Although many institutions in recent months have sold their Greek bonds to the European Central Bank, several investors assume that many banks would not be able to cut Greek debt without further notice.

In recent days, the bank stocks in Germany and France have been the worst losers. If in doubt, again the state would step in and rescue the banks with taxpayers’ money. Money that is already missing due to the current tight situation would probably be financed through taking on new debt.

Finally, the euro itself could come under pressure, because the European Central Bank is sitting on a huge mountain of Greek debt. In the case of bankruptcy this debt would become worthless and the rate of the euro would decline accordingly. By how much is unpredictable.

One certain outcome is an increase of political pressure on the government in Athens. They need to save more and increase revenue; otherwise they will be unable to repay the euro countries, the ECB and the International Monetary Fund the next installment of the emergency bailout.

The likelihood that the country can really save itself from crisis is looking slim. The recession in Greece is stronger than previously thought, signaled by Greek Finance Minister Evangelos Venizelos. On Saturday Venizelos said the Greek economy would probably contract this year by more than five percent.

It is therefore possible that the issue of euro bonds – loans with common interest rates across the eurozone – will once more be under discussion. The risks through the bonds at least seem less than the consequences of the Greeks going bust.