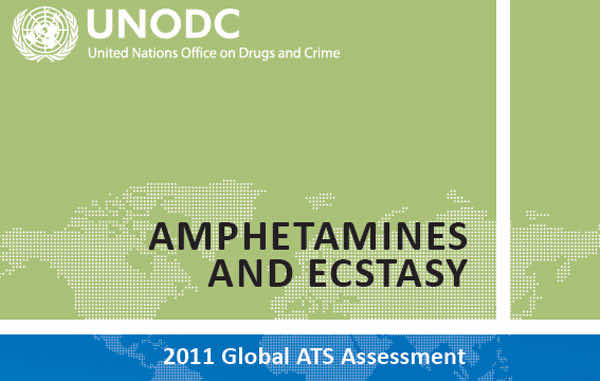 The use of amphetamine-type stimulants such as ecstasy and meth is surging around the world, a new United Nations report finds, warning that the growing trade in these illegal drugs and the high profits they bring to criminals are posing an increasing threat to health and security.The report from the UN Office on Drugs and Crime (UNODC), issued today, says that amphetamine-type stimulants (ATS) now rank as the world’s second-most widely used type of drug after cannabis, surpassing heroin and cocaine.

While the use of cannabis, heroin and cannabis remained largely stable between 2005 and 2009, seizures of ATS and the discovery of clandestine laboratories indicate a rapid increase in the use of these drugs, especially in South-East Asia, West Africa and Central and South America.

The number of methamphetamine pills seized in South-East Asia, for example, has more than quadrupled since 2008, rising from 32 million that year to 133 million in 2010, according to the report.

Comparatively cheap and easy to manufacture, ATS have become increasingly appealing to criminal networks as a source of money and an entry into new markets.

“Unlike cocaine or heroin, these drugs can be made everywhere,” one of the report’s co-authors, Justice Tettey, told the UN News Centre. “You don’t need a farm in Afghanistan. It can be done in your garage or in your kitchen.”

Dr. Tettey, the chief of UNODC’s laboratory and scientific section, said the relatively low stigma attached to ATS compared to cocaine and heroin was another factor driving its increased popularity.

“There is this conception that they are not really hard drugs, but people can get hooked on these.”

UNODC Executive Director Yury Fedotov noted that the market for ATS has evolved from a cottage-style industry to one involving organized crime groups and much higher levels of integration throughout the production and supply of the drugs.

“We are seeing manufacturing shifting to new markets and trafficking routes diversifying into areas previously unaffected by ATS,” he added.

The number of ATS laboratories captured in East Asia and South-East Asia almost doubled between 2008 and 2009, while methamphetamine use and production is also on the rise in Europe.

In June this year, a methamphetamine laboratory was discovered in Nigeria, another sign that the West African region – once considered unaffected by the production and trafficking of ATS – has been drawn in.

The report identifies another related problem – the emergence last year of new stimulant drugs or “analogue substances” that act as substitutes for cocaine and other drugs and fall outside of many international laws and control.

Marketed with such names as “bath salts” and “plant food,” Dr. Tettey said they can be highly toxic while their long-term effects are still little known.