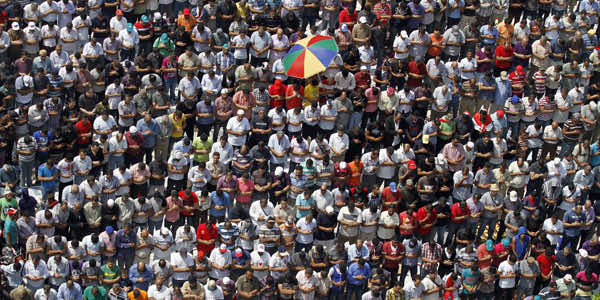 Crises have a way of provoking interesting, occasionally useful intellectual debates. September 11 was no exception, forcing foreign policy analysts and policymakers to grapple with bigger ideas. Oddly enough, it was some in the Republican Party who made perhaps the most radical argument, that the attacks that day were, in fact, a direct result of Middle East’s democratic deficit. In the absence of freedom, Arabs lacked legitimate outlets to express their political grievances, making them more likely to resort to political violence and terrorism.

This formed the intellectual justification for the Bush administration’s rhetorical emphasis on democracy promotion and for what would later become the “forward strategy for freedom.” As President George W. Bush and senior officials like Condoleezza Rice were fond of saying, “the status quo is untenable.” The status quo was untenable.

But to draw a link between Bush’s policies and the Arab revolts — as some neoconservatives insist on doing — makes little sense. In Arab eyes, Iraq became a model not of what to do, but what to avoid. That said, actions have unintended consequences.

Would the Arab spring have happened without September 11? With so many variables at play, it is a difficult counterfactual to entertain. What we do know, though, is that the 2000s, alongside Bush’s democracy promotion program, were a breakthrough for democracy in the region. December 12, 2004 saw Egypt’s first explicitly anti-Mubarak protest. Soon, protests became a routine sight in the streets of Cairo. The numbers were rarely overwhelming but a precedent, at least, had been set. Across the region, elections, however fraudulent, offered a semblance of competition. There was something to fight for. Whatever its faults, and whatever its intent, the Bush administration had helped inject democracy and democracy promotion into Arab public discourse.

The story then took a tragic turn. By 2006, the Bush administration had backed away from democracy promotion, reverting to the “stability paradigm” of previous decades. Autocratic regimes were as emboldened as ever. They — sometimes with brute repression, sometimes with a dash of subtlety — cracked down on the opposition. In Egypt, the period between 2006 and 2010 was likely the worst since the 1960s. In Jordan, another close U.S. ally, the regime presided over what were arguably the most fraudulent elections in the country’s modern history.

The Bush administration didn’t act on its own ideas. But the ideas were there. In the long run, democracy promotion remains the best and most effective way to fight terrorism. That such a notion came to be associated with such an unpopular president made it easy to dismiss. The academic literature, however, appears to lend it support. Drawing on considerable empirical data, Alan Kruger — who is now, interestingly, President Barack Obama’s pick to head the Council of Economic Advisers — found that “terrorists are more likely to come from countries that suppress political and civil rights.” Reviewing the evidence, Steven Brooke and I made the argument for a causal link between lack of democracy and the incidence of terrorism in this 2010 Policy Review article.

As Egypt and Libya — formerly two of the more flagrant exporters of terrorists — democratize, scholars will be better able to test the hypothesis. But, with or without the data, what we see right in front of us tells a powerful story. The triumph of democracy in places like Egypt and Tunisia can do what all the “hard” counter-terrorism measures can’t — discredit al-Qaeda’s narrative that political change can come only through violence.

So, yes, the advent of democracy is likely to contain the spread of violent extremism. But it is, of course, no panacea. Democracy, more often than we like to think, empowers radical and illiberal forces. Even the best established democracies struggle with this reality. In countries like Denmark, the Netherlands, and Norway, far-right populists are the second or third largest parties in parliament. The United States has its own particular Tea Party variant. The Arab world will prove no exception. But if there are going to be radicals — and there almost always will — then better to incorporate them in the democratic process. There, they can promote their illiberalism through peaceful means within the confines of a credible political system. It’s not perfect. At times, it can even be dangerous. But it’s better than the alternative.