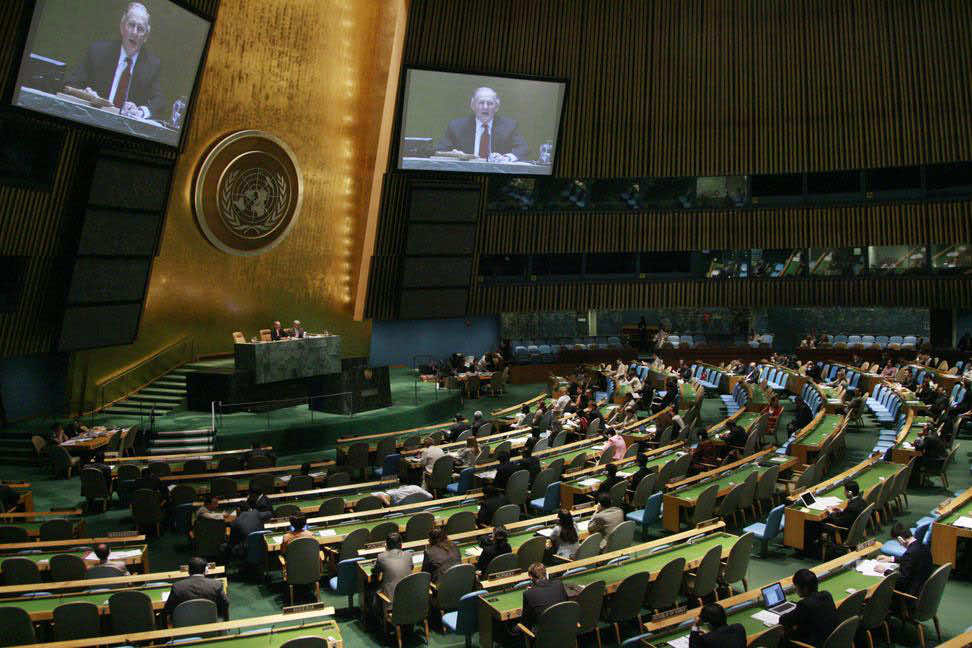 The General Assembly today opened its annual session with a fervent plea for cooperation in tackling looming crises from conflicts to climate change, and a nostalgic look back to a former secretary-general who died 50 years ago in the service of peace.“Moving forward the myriad of issues before us will require hard work, integrity, and partnership,” the Assembly’s President for its 66th session, Nassir Abdulaziz Al-Nasser of Qatar, told the meeting, which was dedicated to the memory of Dag Hammarskjöld, who died in a plane crash in 1961 while trying to bring peace to the nascent country now known as the Democratic Republic of the Congo (DRC).“The sands are shifting. We have before us a unique opportunity to shape change and ensure that our next chapter will be safer for the most vulnerable, more prosperous for those in need, and kinder to Planet Earth.”He outlined four main areas of focus for this year’s session. The first is the peaceful settlement of disputes, a need that has become more relevant and urgent than ever. “It is my view that the General Assembly should, through its revitalization, become more engaged and empowered on issues of mediation, so that it can fulfil its role as the world’s preeminent peacemaker at this major juncture in international relations,” he said.

Turning to UN reform, Mr. Al-Nasser called for revitalizing the Assembly’s work so that it remains efficient, effective and representative, especially in responding early to emerging crises, and for reforming the Security Council.

The Council, whose resolutions alone are legally binding while the Assembly’s are recommendations, has not changed in decades, with five permanent members with veto powers – China, France, Russia, the United Kingdom and the United States – and 10 non-permanent members without veto elected for two-year terms. Formal talks to reform it have been under way for more than 18 years.

“There is no shame in recognizing that after six decades our organization needs reform,” Mr. Al-Nasser said.

On the third priority, improving disaster prevention and response, he cited the unprecedented surge of natural and man-made disasters. “Populations across the world are experiencing increased vulnerability, food insecurity, and health and education crises,” he said. To address these critical issues, we must enhance cooperation among various actors.”

In the last area, sustainable development and global prosperity, he stressed the primacy of the UN Millennium Development Goals (MDGs), the eight ambitious targets set in 2000 that aim to slash hunger and poverty, maternal and infant mortality, a host of diseases and lack of access to education and health care, all by 2015.

“With the target date for the achieving the MDGs on the horizon, and as we face global economic turmoil, improving global governance and finding innovative financing modalities will continue to be on our agenda,” he said, citing the challenges of climate change and the urgency of solving the global financial crisis. “No one can fix this issue alone and the UN should be the central forum to discuss this issue.”

In a separate speech Mr. Al-Nasser praised Mr. Hammarskjöld as a pioneer of preventive diplomacy, the effort to resolve crises before they become deadly and intractable. “Mr. Hammarskjöld was formative in shaping the UN’s methods of operation,” he said.

“Mr. Hammarskjöld was the driving force behind the establishment of the first United Nations Emergency Force, dedicated to securing and supervising the cessation of hostilities in the Suez Canal ¬– an approach that is now a core function of our activities – today called ‘peacekeeping’.”

Praising his predecessor, Secretary-General Ban Ki-moon told the 193 Member States: “Nothing could be more fitting at this tumultuous time than to reflect on the life and death of Dag Hammarskjöld… we are inspired by the power of his conviction and we pledge to carry on the work of the United Nations that he died defending.”

He noted that one Mr. Hammarskjöld’s deepest convictions was that the UN exists not for the major powers but for the other, smaller, weaker countries, especially at that time the newly independent nations of Africa.

“His words ring as true today. This reason for the UN’s existence was tested recently in Libya and in Côte d’Ivoire,” Mr. Ban said, referring to two West African countries where the UN more recently helped to promote democracy after civil wars. “In those cases and others, we stood firmly on the side of democracy, on the side of justice, on the side of the people.”

Mr. Al-Nasser told a later news conference that his main theme would be mediation. “This is a very timely issue,” he said. “The world is going through difficult times. Diplomacy is needed today. It is very important.”