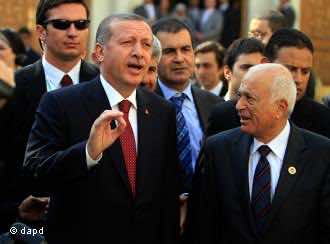 Once Israel’s only Muslim ally, Turkey’s ties to the Jewish state have sunk to a historic low in the aftermath of the 2008 Gaza War and the shooting deaths of nine Turkish nationals by Israeli forces during a raid against a Gaza-bound flotilla in 2010.

Erdogan has refused to normalize relations with Israel until it apologizes for the incident, pays compensation to the families and lifts its blockade on the Gaza Strip.

“While Israel is trying to secure its legitimacy in our region on one hand, it is taking irresponsible steps on the other,” said Erdogan, who is the leader of the lslam-based Justice and Development Party (AKP) in traditionally secular Turkey.

The Turkish premier’s increasingly hard line against Israel and in support of Palestine has found resonance in the Arab world, which once viewed Turkey with suspicion.

“All Arab peoples appreciate what you are doing,” said Arab League Secretary-General Nabil Elaraby while introducing Erdogan in Cairo. “We consider that there is a strong friend who is always standing on the side of justice.”

Meanwhile, the United States – a close ally of both Israel and Turkey – has vowed to veto the Palestinian proposal and call for the resumption of direct negotiations with the Jewish state.

The European Union remains divided over the Palestinian bid while Russia has promised to support the proposal.

Palestine currently has “observer” status at the UN. Full-fledged membership requires a recommendation from the Security Council and support from two-thirds of the General Assembly.

If full-fledged membership fails, Palestine can apply for non-member status, which requires a straight majority in the General Assembly.