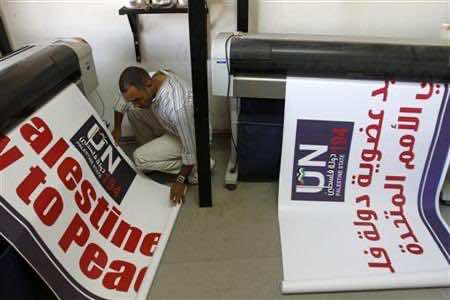 JERUSALEM  – U.S. envoys raced on Wednesday to try to revive Middle East peace talks and avert a Palestinian bid for United Nations membership, but a U.N. official said it was probably too late to stop the move opposed by Israel and the United States.

Their visit appeared to be a last-ditch effort to persuade Abbas to abandon plans to seek to upgrade the Palestinians’ U.N. status, a step the Western-backed leader has said he is taking in the absence of peace negotiations.

“There is a lot of intensive diplomacy on a formula that could avoid a diplomatic train wreck, and it is still going on,” a senior Israeli government official said.

Israel and the United States have urged Abbas to return to talks rather than pursue unilateral steps at the world body during the General Assembly session that begins on Monday.

Abbas broke off those U.S. .-sponsored negotiations soon after they began last September, after Netanyahu refused to extend a 10-month partial moratorium on Jewish settlement construction in the West Bank, land Israel occupied in a 1967 war and which Palestinians seek as part of a future state.

Robert Serry, the United Nations’ special coordinator for the Middle East, said that based on his contacts with the Palestinians, he believed they would not abandon their U.N. bid.

“I feel that is now too late to stop the Palestinian train, so to say, which is now on its way to New York,” Serry said in a speech at a counter-terrorism conference near Tel Aviv.

Serry said he was involved with international mediators “to try to ensure there is also life after New York,” comments that appeared to hold out the prospect of renewing peace talks even if the Palestinians follow through with their U.N. initiative.

Ashton later said she had extended her trip to meet again with Netanyahu, at the Israeli leader’s request.

“I hope that in the coming days (that) what we’ll be able to achieve together will be something that enables the negotiations to start,” she said.

Lieberman, who leads a far-right party in Netanyahu’s governing coalition, warned the Palestinians of “grave consequences” if they pressed ahead with plans to upgrade their U.N. status, currently at observer level without voting rights.

He did not elaborate, but other ministers have suggested withholding funds from the Palestinians or annexing settlements.

Only the Security Council can approve a bid for full U.N. membership and the United States has said it would veto it.

But Palestinians could seek upgraded status as a “non-member state,” requiring a simple majority in the 193-nation General Assembly. Approval would open the way for access to U.N. agencies and potentially direct recourse to the International Criminal Court to pursue cases against Israel.

On Tuesday, U.S. Secretary of State Hillary Clinton said Washington hoped to “get the parties back into a frame of mind and a process where they will actually begin negotiating again.”

Mohammad Shtayyeh, a senior aide to Abbas, has said Palestinians would listen to any proposal but suggested the current U.S. push had come too late.

A revival of peace talks could also be complicated by Netanyahu’s opposition to U.S. President Barack Obama’s proposal to base the borders of Israel and a future Palestinian state on pre-1967 war lines with mutually agreed land swaps.

Netanyahu has called the 1967 lines, in which Israel was some 10 miles (16 km) wide at its narrowest point, indefensible.

Peres, the sources said, suggested that Netanyahu publicly accept the concept of establishing a Palestinian state on territory equal in size to the West Bank and Gaza Strip — a proposal that would allow the 1967 lines to be redrawn.