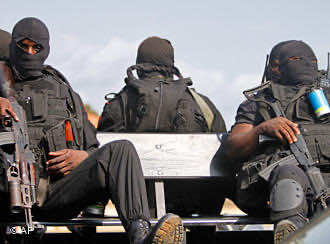 The Arab revolutions have inspired protesters and human rights advocates in other African nations. In oil-rich Angola, activists have repeatedly taken to the streets to demonstrate. But the authorities are cracking down.

There have been repeated demonstrations against Angola’s President in the past months. But the government under Jose Eduardo dos Santos is trying to crush the opposition. Authorities on Monday sentenced 17 young opposition members to up to three months in jail for their role in an anti-government rally on September 3 – and further sentences are expected later this week.

About 300 people had rallied on September 3 in the capital Luanda’s Independence Plaza under the motto “32 years are enough” – a reference to dos Santos’ 32-year rule. It was one of the largest protests yet organized by a group of students and musicians. A few smaller opposition parties, such as Bloco Democratico and the Democratic Party for Progress-Angolan National Alliance (PDP-ANA) followed the call.

The oil-rich southern African nation has become one of the world’s fastest-growing economies since its 27-year civil war ended in 2002. But most Angolans still live in poverty, while the ruling elite have amassed fortunes. Forbes magazine this year named dos Santos’ daughter Isabel as one of Africa’s richest women.

The rally was mainly advertised through the internet, e-mails and text messages. Traditional opposition parties such as the National Union for the Total Independence of Angola (UNITA) or the National Front for the Liberation of Angola (FNLA) were left on the sidelines.

The most prominent representative of the new movement is the rapper Dionisio Casimiro or “Carbono.” He had called for the protest in interviews and on YouTube.

“Many of us were already born under this terrible government,” Casimiro said before the protest. “Angolan society is a victim of poor governance. We are suffering under a certain repression.” He said he was aware that the organizers could be persecuted.

“We don’t know to what extent the regime will use its power to harm us,” he said. “But we say clearly that we are not violent.” Casimiro has been sentenced to three months in jail.

But at the demonstration on September 3, violence did erupt. Several Angolan and foreign journalists were injured and according to government statements, three policemen as well.

Angola’s interior minister Sebastiao Martins justified the court proceedings against the protesters because of this violence.

“We will continue to take drastic measures in order to prevent images like we’ve seen on television from England, from London, from Greece or other places,” Martins said. “But we are also of the opinion that such situations are normal. They belong to a lively democracy. If we had such a shortage of democracy which is always alleged, then such demonstrations would not even be possible.”

Several international and Angolan human rights organizations, however, claim government powers are responsible for the outbreak of violence on the edge of the protests. Lisa Rimli, an Angola expert at Human Rights Watch, said the attacks did not originate from the demonstrators but from the agitators.

“Several eye witnesses identified a group of men who smuggled themselves into the protests but didn’t belong to the demonstrators,” Rimli said. “The men looked very similar and proceeded in a very coordinated manner. And they had police protection! Why? Several journalists told us that they and other protesters were attacked right in front of the police’s eyes and they did not intervene.”

Human rights groups also criticized that during the court proceedings the accused were held in unknown jails and not given access to their attorneys.

The Angolan journalist Orlando Castro, who is based in Portugal, said the government was trying to make the protesters lose their credibility through the secret police’s violent acts. This enabled the government to justify the crackdown against the demonstrators.

“In my opinion, the reason for the repression is that the government is afraid the examples from Tunisia, Egypt and Libya could also set a precedent in Angola,” Castro said. “That is by all means understandable, since Angola is led by an authoritarian regime that wants to curb freedom of opinion in a very undemocratic manner. Since the conditions in Angola are similar to these other countries, the government is trying to choke the possible problems right at the root.”

A further 30 protesters are appearing in court this week. They had peacefully protested on September 8 against the trials of the other demonstrators and were subsequently arrested.