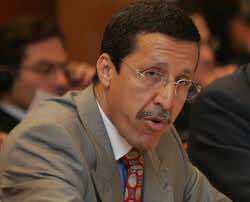 Moroccan permanent representative to the United Nations Office at Geneva, Ambassador Omar Hilale, said Wednesday in Beirut that Morocco, deeply convinced of the humanitarian objectives that led to the signing of the Convention on Cluster Munitions, adheres to humanitarian principles and objectives which it is based on.

Hilale, who heads a delegation to the work of the Second Meeting of States Parties to the Convention on Cluster Munitions, which runs until 16 September in the Lebanese capital, said that Morocco has joined the Oslo process since its early stages from Vienna to Wellington and Dublin.

Morocco shared the satisfaction expressed during this conference about the entry into force in August 2010 of this Convention, he said, noting however, that the Kingdom “is unable for the moment to join it and this because of the situation of the regional conflict imposed on it (Morocco) for over three decades.”

Morocco, whose large part of its southern provinces are infected by landmines and explosive remnants of war, carries out, for over two decades, de-mining operations through the mobilization of significant human and technical resources, he said.

“Fortunately, none of the victims of mines and explosive remnants of war has been injured by cluster munitions,” he added.

Hilale also recalled that Morocco, a party to the Convention on the Rights of Persons with Disabilities, began the compliance of national legislation with the provisions of the Convention, adding that all the victims of explosive devices are provided with free medical care and prostheses in the hospitals of the Royal Armed Forces.

Similarly, local NGOs, in collaboration with the social services of the state, assist their integration into the economic and social fabric of their homes and their compensation, he added. Morocco, he noted, develops long been a humanitarian policy which aims to be exemplary and therefore adheres to humanitarian principles and objectives underlying the Convention on cluster munitions.

Morocco, a party to almost all the instruments on disarmament and arms control, remains convinced, as member states of the United Nations, that the effectiveness of a legal instrument in the field of disarmament depends largely on its degree of universality, he said.