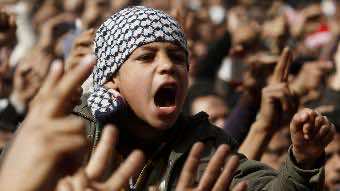 It’s quickly become fashionable to poor scorn on the high hopes inspired by the uprisings in the Arab world this year.

Commentators, citing the fact that the regions problems have not evaporated overnight, continue talking as if it was the same old Middle East.

We saw one contribution along these lines by the [formerly “honourable”?] Peter Reith who weighed in last month on The Drum dismissing hopes of a transformative change in the region as “naiveté”. He get’s much right.

He’s right that the armed forces are in charge of the country, as they have been “since 1952 without one day’s interruption”. He’s right that the majority of the protesters mainly “wanted lower bread prices,” and an improved rule of law. He’s even right that “there was no revolution in Cairo” this January – not a whole one. Not yet.

Despite getting all this right, in the general thrust of his article, that the high hopes inspired by Egyptian people will likely collapse into economic stagnation and backwardness without Western guidance, he is wrong. So wrong, in fact, that he doesn’t even know what he’s wrong about.

The revolution, by the time it’s finished, won’t just change Egypt, not even just the region, but the whole world.

The fall of the Berlin Wall, as a historical comparison, is far more appropriate than Mr Reith and his ilk would like to think. There are three levels on which the example is apt.

The first is the fall of a terrible system of repression. While the armed forces, which were always at the heart of the old system, and from which all three of Egypt’s dictatorial presidents have emerged, certainly continues to abuse its citizens and suppress dissent. It does so now, however, under the scrutiny of an emboldened press and public. What’s more, the population have only been willing to accept their rule as a temporary measure, and their legitimacy will evaporate if elections – which  seem likely to be pushed back again from November – are not soon held.

Egypt is the most populous Arab country, as well as the most central both geographically and culturally. It is the home of the Suez Canal. It is not the second largest recipient of US military aid in the world (after Israel) for no reason. Its dictatorship has been a cornerstone of US policy in the region since the 70s, and central to pushing American interests on a region that could and should – if free of colonial tinkering – emerge as one of the globe’s great centres of culture and trade, on a par with Europe or East Asia.

The third and least discussed point of comparison is that each represented the beginning of the end for a failed and dogmatic economic ideology. In 1989 it was the extreme statism of the Soviet Union. In 2011 it is extreme marketism in the form of the thoroughly exhausted “Washington Consensus” pushed by the likes of Mr Reith, which has failed so dramatically in Egypt – and indeed around the world.

Mr Reith, predictably, takes the opposite view, claiming that Egypt – which was named by the World Bank as it’s “Top Reformer” worldwide in 2008, and praised (along with Tunisia and Libya) by the IMF for its business-friendly policies just months before the uprising – was embracing the Friedmanite model too slowly. As always with the great white witchdoctors of the West, if it didn’t rain, you didn’t dance hard enough, or to quite the right rhythm.

The Egyptians are not buying it. There has been an undoubtable leftward shift to Egyptian politics, including a rejection by the interim government of a new round of IMF loans by the government. A similar fate may await the deal proposed by the European Bank for Reconstruction and Development, which we can safely assume will strongly resemble the ones Mr Reith boasts of having helped negotiate.

This is not happening in a vacuum, across Egypt workers are striking, and independent unions are dislodging the old state-run ones, as workers demand wages and workplaces compatible with human dignity. What’s more, this revolution did not come out of nowhere in a flash of Facebook magic, and for the seed of the Egyptian revolution it is to this labour movement we should look.

Much has been made of the April 6 Facebook group, which booked the initial protest for January 25 (formerly police day, no doubt soon to be named revolution day). These net-savvy activists have been courted by countless media outlets and world leaders including Hilary Clinton and David Cameron – but very few have bothered to look at where their name comes from.

On April 6 in 2008, residents of the city of Mahalla poured out of their homes and into the main square, trampling Mubarak’s picture and calling for the fall of the regime. They were doing so in solidarity with the more than 20,000 members of the militant Textile Workers Union who were continuing a long campaign of strikes that inspired people around the country – including the middle-class tweeps who booked the date of the revolution on Facebook.

This of course has been generally ignored. Unions and collective bargaining, as forces for social change don’t fit into the preferred narrative of Mr Reith and his companions in the established political class and parroted by most of the press.

The narrative, however, will have to adjust. Neo-liberal policies are failing before our eyes right around the world, with further free market reforms compounding the problem – as the private risk of capital is being socialised, with a banking crisis being hoisted onto citizens under the guise of a public sector crisis, and the language of “austerity”.

With no established parties willing to fight this, genuinely populist left-wing activism is already beginning to pick up the slack.

In 2011, the spirit of Tahrir has been echoed not just around the Middle East (including in Israel)  but in Greece, Spain, Portugal, the UK, the US, Chile, Burkina Faso and more. And as the workers in Wisconsin receive letters of solidarity from their comrades in Mahalla, and the internet kicks into gear as both a tool for organising and challenge to the dominance of the media giants, these local uprisings are beginning to add up to a whole greater than the sum of its parts.

The Global Justice Movement, which was – before the racist and divisive War on Terror era – the fastest-growing political movement in history, is ready for its second wave. Believe the hype, and then some. Something big is happening here.

Austin G Mackell is an Australian freelance journalist with a special interest in the Middle East and a progressive outlook. He tweets on @austingmackell and blogs on The Moon Under Water