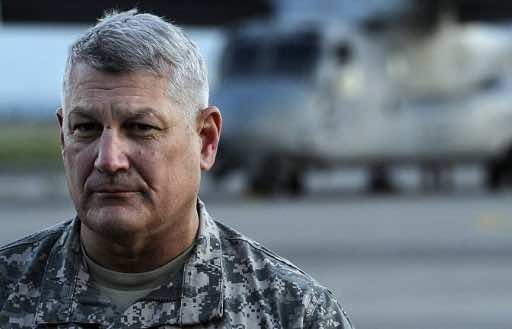 WASHINGTON — Africa must improve security cooperation in battling extremists or face the prospect of a continent-wide terror network threatening the region and the United States, a top US commander warned Wednesday.

General Carter Ham, head of US African command AFRICOM, said countries in North Africa face increasing threats from terrorist groups like Al-Qaeda affiliates who wish to join forces — as well as from extremists in Libya who might fan out to other locales, bringing a proliferation of weapons and an exodus of people from the war-torn country.

“Al-Qaeda main may be somewhat diminished, but the affiliates, both acknowledged and those who would like to be affiliated, may be gaining in capacity. And that’s what I see in Africa and that’s what concerns me,” Ham told reporters in Washington.

He said three groups form the greatest threat: the Algeria-based Al-Qaeda in the Islamic Maghreb (AQIM), which has claimed numerous terrorist attacks in the region; the militant Shebab operating out of Somalia and East Africa; and Islamist group Boko Haram, blamed for repeated attacks in Nigeria including a bomb blast at UN headquarters in Abuja in August.

“Each of those three independently I think presents a significant threat, not only in the nations in which they primarily operate, but regionally, and I think they present a threat to the United States,” Ham said.

The organizations have “very explicitly and publicly” voiced intent to target the West, and while Ham said he questions their capability to do so, “I have no question about their intent to do so.”

He also warned that the groups have expressed intent to “more closely collaborate and synchronize their efforts” in training and operations.

“If left unaddressed, you could have a network that ranges from East Africa, through the center and into the Sahel and Magreb, and I think that would be very, very worrying.”

Ham said US cooperation with regional partners was vital, and that while African nations must take the lead, Washington is providing assistance to countries like Mali.

But when pressed on specifics of US operations, including the possible use of military drones over Somalia, Ham was dry on the details.

“I like the fact that Al-Shebab and other extremist leaders in some parts of the world don’t know where we are, what we might do, what we are doing, what we’re not doing,” he said.