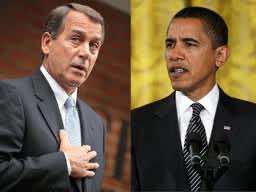 This summer, during the country’s debt limit debate, the narrative put forward to Americans was that the government faced an unsustainable debt. Americans would have to realize that the country simply could no longer provide the services that they had come to expect. Major cuts in spending, including entitlements such as social security and Medicare, were required to avoid bankrupting the United States in the future.

Washington lawmakers vowed they would not raise the debt limit unless the President and Congress agreed on a serious plan to address the country’s long term fiscal sustainability. The pledge by 277 lawmakers at the start of the congressional session to oppose any new tax increases indicated that the United States was already overly taxed, and the debt problem was a result of government overspending. Or as Republican National Committee Chairman Reince Priebus described, “by government’s insatiable appetite to grow.”

For observers abroad, perhaps unfamiliar with the “debt limit”, a distinction of the American political system created during World War I, this restricts the amount of money the US government can borrow. By August 2 this year, the country was due to reach the approximately $14.3 trillion ‘ceiling.’ In the past, Congress raised the debt limit as a matter of procedure since the debt reflects the money the government has already borrowed through budgets appropriated by Congress itself.  Since 1960 the debt limit has been raised seventy-eight times (49 occasions of which were under Republican presidents, 29 under Democrat). But since the Wall Street bailout in 2008, the 2009 stimulus and 2010 health care reform, debt and spending have become political buzzwords.

During negotiations in July, Democrat leaders barely challenged this narrative. President Obama initially proposed to save $4 trillion over ten years and to strike a ‘grand bargain’, through more than $3 trillion in spending cuts, versus only $800 billion in measures to raise revenues. The new revenues supposedly would be generated through tax reforms that eliminated loopholes, while still lowering tax rates.

Because the president’s proposal contained new revenues, his plan was rejected by Republicans and in the end the deal reached provided for fewer total spending cuts. A total of $900 billion in cuts were agreed to. In addition, a Super Committee was established, consisting of six Democrats and six Republicans, that by the end of November must recommend an additional $1.2 to $1.5 trillion in debt reduction measures. If committee members are unable to reach an agreement, triggers kick-in (after the 2012 Presidential elections) which automatically begin to cut government spending.

Reasons for the debt and financial problems

The stalemate over the ‘debt limit,’ which has been raised routinely (including seven times under President Bush) and does not exist in most other countries, created an “artificial crisis,” that brought the country to the edge of defaulting. Reaction by markets, the S&P downgrade and the zero new job gains for the month of August following the agreement reflect the fallout created by the controversy.

As for the debt’s causes, the main drivers were rarely identified. They include the cost of the healthcare system, the defense budget and low government revenue. American government spending is unsustainable in the long-run because of the expense of its health care system. It is almost double per capita than other developed countries that still manage to provide all their citizens with health insurance. Continued annual double-digit percentage growth in its cost eventually threatens to bankrupt US government programs like Medicare and Medicaid.

The United States overspends on defense. At $700 billion in 2010, this made up 43% of worldwide defense spending according to SIPRI, the Swedish based think-tank that is the global authority tracking countries’ arms and military expenditures. This is also unsustainable considering America’s other needs. And it is unnecessary. The defense budget is greater than that of the next 16 countries combined, most of which are US allies. Moreover, this total does not include national security spending on the Department of Homeland Security, the National Security Administration, CIA, Veterans Administration and the military related activities of the Department of Energy.

In addition, the country’s urban planning and transportation system results in the US being responsible for 20% of world energy consumption, a major reason for its trade deficit. Instead of discussing how to address these structural issues, lawmakers mostly called for broad, across the board spending cuts. Republicans even continued to call for repealing the 2010 healthcare reform act, designed to address causes of healthcare’s ever rising costs, as well as many opposing cuts to defense.

The debt has also been a consequence of government revenue for the past three years being at its lowest level since 1950. Federal government revenues as a percentage of GDP have been less than 15% since 2009. The last time this occurred it was sixty-one years ago. The historical average is 17.9%.

The United States remains much less taxed than international counterparts, and could opt to raise more revenue to preserve services or make investments. Total tax revenue, including local, state and national governments, as a percentage of GDP in the US was 24% in 2009, according to the Organization for Economic Cooperation and Development. Germany, a country whose national economy has weathered the global financial crisis better than most, possessed a rate of 37% in 2009. For France, this was 41.9%. The UK, a country that policy-makers often prefer comparing the US with because of their more similar political and economic systems, tax revenues were still ten percentage points higher, at 34%. In fact, for only two of thirty-three OECD countries were revenues lower, Chile and Mexico. It is no wonder the United States seems like it is going broke and unable to afford services.

The argument over revenues and taxes

The low level of revenues comes on the heels of thirty years of reducing the progressiveness of the tax code, and the Bush 2001 and 2003 tax cuts, not to mention tax breaks that made up 42% of the 2009 stimulus. Top rates in 1980 were 70-percent. Today they are 35%. According to The Center on Budget and Policy Priorities the Bush tax cuts reduced revenues between 2001 and 2008 by $1.7 trillion. Moreover, they came at a time when the US entered wars in Afghanistan and Iraq, the first time in the country’s history that it lowered taxes while at war. Or as quipped John Stewart of the Daily Show, the first time in the history of civilization.

To justify the Bush tax cuts in 2001 and 2003, proponents claimed this would increase investment and spending, thereby creating greater economic growth and potentially increase government revenues. However, the 1.1 million jobs created during the administration of George Bush was one of the lowest expansions in recent history. The previous tax levels existed while 22.7 million new jobs were created during the Clinton presidency. Along with a robust economy, the government ran budget surpluses for four straight years; something that should be particularly appealing to debt hawks! Still, Republicans over the past year have opposed proposals to restore Clinton-era tax rates on the top 1% and 3% of earners, claiming this would be too damaging for economic growth. As the esteemed US journalist Bill Moyer stated, it is a position “of ideologues who hold on to their views no matter how many times they have been refuted.”

The stringency of opponents to new revenues received seemingly a devastating blow when last month, two weeks after the debt limit negotiations, Warren Buffet, the second richest American, wrote a New York Times Op Ed that revealed he paid a lower overall tax rate on his income than most US citizens. The 17.4% rate that made up his federal taxes last year is much less than the 33% to 41% of the rest of his office staff, characteristic of what most middle and working class Americans pay. Buffet explained reasons that he is able to do so, such as the “carried interest” rule that allows his income, mostly from trading stocks, to be treated as “capital gains” and subject to a 15% rate. He also is spared paying any significant amount of payroll taxes for social security and Medicare, which are only applied on the first $106,000 in income.

In no democracy has a progressive tax system been accepted as less desirable than one which taxes the highest earners at lesser rates, but there were no shortage of rebuttals to Buffet’s calls for policy makers to amend the tax code. Raise the rates, and supposedly these earners will leave the country. But as Warren Buffet pointed out in his piece, “I have worked with investors for 60 years and I have yet to see anyone — not even when capital gains rates were 39.9 percent in 1976-77 — shy away from a sensible investment because of the tax rate on the potential gain.”

And who is in the best position to contribute to reducing the debt? Over the past thirty years most Americans have experienced modest to stagnant growth in income. Tuesday, the US Census Bureau even released a report showing that 2010 median household income had fallen to its 1997 level.  The exception has been with top earners. Between 2002 and 2007, for example, of all new income generated in the US, more than 50 percent was gained by the top earning one percent of Americans. In other words, the rest of the 99% of the population split the less than fifty cents remaining of each new dollar generated, as documented by Jacob Hacker and Paul Pierson in their acclaimed 2010 book, “Winner Take All Politics.” In 2007, the highest earning 1% of the population received 23% of income.

Meanwhile the debt reduction plans being floated by lawmakers through spending cuts have been that much more troubling, when aside from the economy being in a severe downturn, the country faces many great needs that it must find ways to fund in the coming years. Infrastructure, education, combating climate change and meeting its energy needs are the largest ones. To bring the condition of the country’s old infrastructure into a state of good repair is estimated to cost $2 trillion, let alone investing in modern infrastructure of the 21st century. But during last July’s discourse, these needs and the money required to fund them were never even mentioned, lost entirely in the chorus to further cut spending.

When Mohamed El Erian, the CEO of PIMPCO, the large bond trading company, was asked on Christiane Amanpour’s This Week, two days before the August deadline to raise the debt limit, whether a deal would restore confidence in markets, he responded that any relief would be “temporary.” According to El Erain the current discussion was failing to address the real causes of the debt, and the interlinked dismal state of the economy. “It does nothing to restore household and corporate confidence, so unemployment will be higher than it would be otherwise; growth will be lower than it would be otherwise and inequality would be worse than it would be otherwise.” He has been shown to be right.

Having observed the political and economic fallout following the debt limit deal last month, President Obama last Thursday proposed a $447 billion job creation plan. It was a welcome break from the recent discourse, even including calls for spending in infrastructure and following up on some of Buffet’s ideas. Hopefully, it is the first step in recognizing the fallacy of a narrative that has been simplistic and inaccurate, and promises to do more long-term harm to the US than good.

There are other choices available to policy makers besides only cutting programs and services, which include a combination of new revenues and addressing root causes of runaway spending in healthcare, and overspending on defense.  The United States still has the capacity and resources to provide for the needs of its citizens and to improve the quality of their lives.