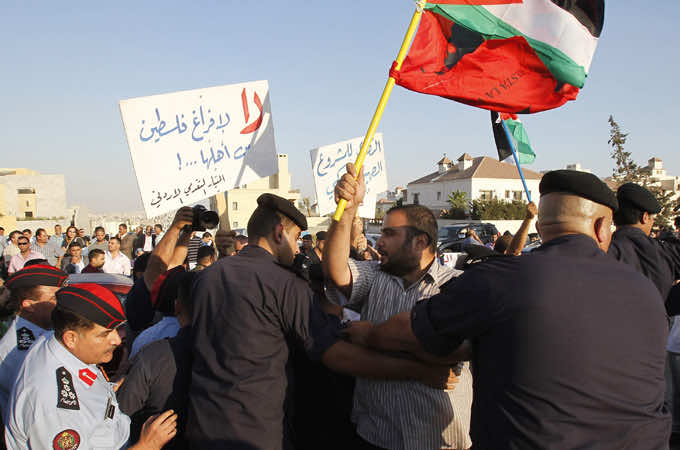 Israel has temporarily withdrawn its ambassador to Jordan over fears of violent demonstrations against its embassy in Amman, Israeli diplomatic sources say.

Daniel Nevo and his senior staff were brought back early on Thursday after being warned of imminent pro-Palestinian protests.

Activists had called for a “million-man march” the same day against the Israeli mission in the Jordanian capital.

The Israeli embassy in Cairo was stormed by demonstrators on Saturday, forcing its evacuation. The countries are in talks on reactivating the Cairo mission.

Israel would decide on Saturday whether its Amman diplomats would go back on Sunday as usual, the diplomatic sources said.

A skeleton staff remains at the Israeli embassy, which is under heavy Jordanian guard.

The embassy evacuation follows demonstrations on Wednesday demanding the closing of the US embassy in Jordan over WikiLeaks cables suggesting covert US plans to turn Jordan into a home for Palestinians.

It was a rare anti-American demonstration in Jordan, a close ally of the US.

The 70 activists burned American and Israeli flags in a noisy protest opposite the embassy in Amman.

They chanted, “The people want the Americans out.”

Roughly half of the country’s six million population is of Palestinian origin. With Palestinian-Israeli peace talks stalled, some Jordanians fear Israel may try to deport Palestinians to Jordan.

Abdullah has spoken out strongly against using Jordan as a substitute for a Palestinian state, a concept favoured by some Israelis.

Whereas pro-democracy protests have toppled the leadership in Egypt, in Jordan King Abdullah II has taken some of the steam out of protests since January with extra subsidies and reform.