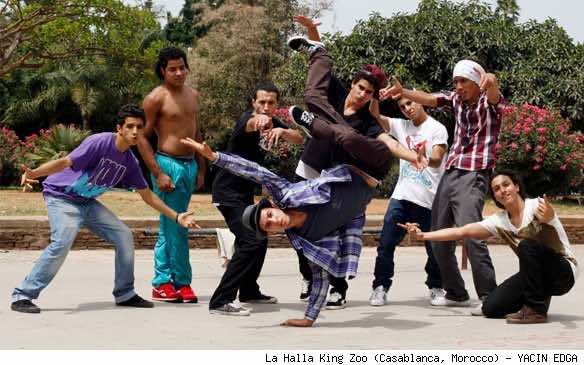 Ahead of this month’s breakdancing world championships in London, Kieran Yates investigates how the street dance is flourishing in the unlikely home of Morocco, where young men and women are body popping their way to a new, more tolerant society.

Popping! Locking! Two-step! Robot! Yes, the B-Boys are back from the 80’s — cooler, cultured, and throwing shapes more impressive than you’ve ever seen before.

So what’s it all about then? Haven’t we had our fill of watching the last 100 ‘Step It Up’ films, and watching dickheads in clubs who think they’re Justin Timberlake (note: girls hate it as much as the rest of you, seriously, no one got laid because he could throw his hat in the air and catch it again.)

In fact, real breakdancing — the partakers of which are called B-Boys — is thriving in the UK and beyond, burgeoning in the unlikeliest of places, a world away from the NY streets where it began.

One of the most unlikely homes for breakdancing can be found in the darkest regions of Casablanca and Marrakech, where the sight of flexible locals somersaulting in the streets is commonplace as you haggle over your teapot.

The country is slowly creating its own infrastructure to support its growing interest in B-Boys. Over the last 10 years, dance workshops, classes, and clubs have been created where young people are encouraged to body pop in harmony.
One of the central voices heading the movement is Creative Director of Theater 6, an arts theatre in Casablanca, and life-long B Boy fan Hicham Akbari. He says that the country’s attitude changed after the ‘Casablanca Bombings’ in 2003, when bombings by extremist terrorists killed 45 people (including the 12 suicide bombers), making it the deadliest attacks in the country’s history.

“After this, the government and Mohammed 6 [King] realised that we needed a cultural community to steer young people away from extremism,” he smiles.

“You might call it a blessing in disguise. After that, we got a cultural voice again, things got easier.”

In the years that followed, Hicham was a central part of creating a haven for young people, which incidentally, became a hip hop haven. He says he campaigned for ‘the right to be different’, and organised festivals every year from 2003 — often with 5000 people attending without any publicity — and created the ‘Moroccan Underground Federation’ for B Boys, DJs and creatives alike.

His dream was lived out. Many famous B-Boys have since come out of Morocco, one of the most famous being La Halla King Zoo or ‘Zoo Crew’ who have received international acclaim. Their success has directed media attention towards the arts in Morocco, and generated income to put on shows such as the ‘B-boy Casa tournament’ which now has sponsors and is changing the way the genre is seen by locals in the country.

The crew’s leader, 28 year old Anass — aka ‘Robin Hood’ — explains: “From 2005, breakdance has become more and more popular but here in Morocco. We are Muslim, we have fought to be accepted as dancers, without people thinking we are haram [shame].”

The lack of support he mentions refers to a minority of extreme conservative Shia Muslims in Morocco who believe that the Qu’ran forbids music and dancing if the words of the song contain any foul words or vulgarity. This notion can be read more conservatively, with no dancing at all to Western music. As a result, the inherent politics of the situation bubbles to the surface from time to time, not least seen in the crew’s name: ‘La Halla King Zoo’.

Another important crew are the ‘Anti B Boys’ based in Marrakech — some of the best in the country, who won the prestigous Maya battle in Moscow in 2009. Crew member ‘Iron Man’ tells me with a grin: “A lot of older muslims think we take drugs to dance like this, they don’t understand.”

The Anti B Boys have made news thanks to the famous inclusion of women into the group, something that they believe represents the new, forward thinking Morocco they are proud of. 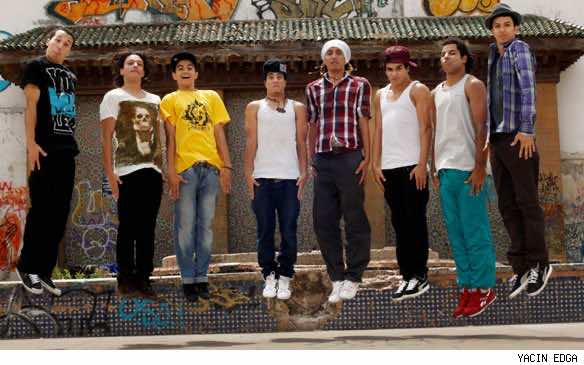 They are also involved with bringing young blood into the scene, commenting: “We would like to go further and further in this field and to be able to train young people so that we can make people discover breakdance, all generations and all ages so that the art of breakdance can be recognised officially in Morocco. Also, so we can teach people our famous moves, Airtracks! (spirals).”

Morocco is now being recognized on an international stage. DJ Hooch, author of ‘B-Boy Championships: From Bronx to Brixton’ and co-founder of B Boy Championships in 1996, is putting on an event later in the month at Brixton Academy. “Moroccans are some of the best dancers it the world,” he says. “They bring something extra to the competitions in terms of expression. It’s a global phenomenon.”

The element of expression is as key today to the genre as it’s always been –- what makes it more striking in Morocco is simply that there are things that many young people feel they need to speak out against, and it is precisely why the genre becomes ever more relevant.

My favourite story from my time there was late one night in Casablanca, amid the busy traffic and cooling temperature, when I watched ‘La Halla Zoo Crew’ gather on some marble steps by a Ford garage (their territory).

Within minutes, they are spinning, flipping and body popping while a small crowd gathers, and they beat box along in encouragement. Ten minutes or so in, while I start taking pictures of them, Anass looks up at me and laughs. “Kieran, are you looking for a revolution? It’s right here!”