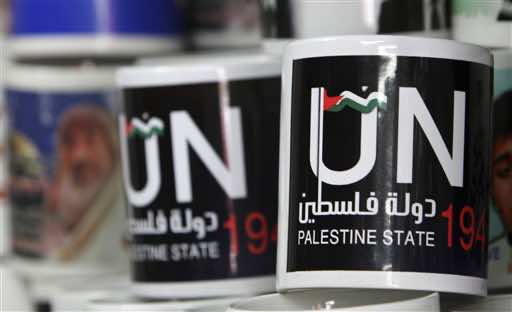 RAMALLAH, West Bank– The Palestinians will ask the Security Council next week to accept them as a full member of the United Nations, the Palestinian foreign minister said Thursday, a move that would defy Washington’s threat to veto the statehood bid.

The remarks by Riad Malki came just ahead of the arrival in the West Bank of a senior U.S. diplomatic team that was in the region in a last-ditch effort to persuade the Palestinians to drop the U.N. bid. Although Malki did not close the door on compromise, his comments signaled the chances of breakthrough were slim.

With a diplomatic showdown looming, Israeli Prime Minister Benjamin Netanyahu announced Thursday that he would travel to the U.N. next week to lead the opposition to the Palestinian initiative.

The emerging scenario would constitute a blow to U.S. diplomacy by forcing Washington to veto a proposal whose outcome – a Palestinian state – in principle is supported by most of the world, including the White House and many in Israel as well.

However, both the U.S. and Israel say a Palestinian state can be established only through negotiations.

It could also drag out the maneuver at the United Nations for months.

The process would have to play out in the Security Council before the Palestinians turn to the General Assembly, where they are likely to find the needed majority for a lesser form of recognition as a “nonmember observer state.”

“We will see if anyone carries with him or her any credible offer that will allow us to look into it seriously and to be discussed in the Palestinian leadership. Otherwise, on the 23rd at 12:30, the president will submit the application,” Malki told foreign journalists in Ramallah.

The Palestinians say they are turning to the U.N. in frustration after years of failed peace talks. While a U.N. vote will not change the situation on the ground, the Palestinians believe it will improve their position if peace talks resume.

“We are going to the United Nations because we want really to strengthen the chances for the resumption of negotiations,” Malki said.

The U.S. envoys, David Hale and Dennis Ross, are the latest in a string of senior diplomats who are trying to get the Palestinians to cancel their U.N. bid and instead resume negotiations with Israel. The European Union’s foreign policy chief, Catherine Ashton, and international Mideast envoy Tony Blair have also held talks with the Palestinians in recent days.

A meeting with Blair late Wednesday, Malki said, “did not produce anything new.”

The last round of Israel-Palestinian talks broke down a year ago, just weeks after their launch, in a dispute over Israeli settlement construction in the West Bank and east Jerusalem. The Palestinians claim both areas, captured by Israel in the 1967 Mideast war for their future state.

The Palestinians say they will not return to the table unless Israel freezes settlement construction and accepts its 1967 boundaries as the basis for a final agreement. Israel captured the West Bank and east Jerusalem, territories claimed by the Palestinians, in the 1967 Mideast war.

Malki would not give specifics on what it would take to get the Palestinians to abandon their U.N. bid, saying only it would require a “firm base with clear terms of reference, a clear timetable and with a clear end game.”

U.S. officials in Washington say the proposed formula would endorse parameters laid out in a speech by President Barack Obama last May, when he said the 1967 lines should be the basis of an agreement. The Israeli daily Yediot Ahronot said other details would include a three-month settlement moratorium and six-month timetable for talks.

The U.S. has already said it will use its veto in the Security Council, the powerful 15-member body that must approve U.N. membership.

There had been some expectation that the Palestinians would go straight to the General Assembly. Approval of a Palestinian resolution is guaranteed in the 193-nation body, which is dominated by developing countries sympathetic to the Palestinian cause.

But Malki said Thursday the Palestinians remain focused on the Security Council, setting the stage for a direct confrontation with the Americans.

Netanyahu, meanwhile, announced he would lead his government’s delegation to the annual gathering in New York. Acknowledging the General Assembly is not “particularly sympathetic to Israel,” he said it was important to go and “lay things out the way they are.”

Netanyahu said he would stress his country’s security needs, particularly in light of the dramatic changes sweeping through the Arab world.

“I will tell the truth, the simple truth, and the truth is Israel wants peace,” Netanyahu said. “We know that this peace is conditioned on recognition and security, and I think these needs are only sharpened against the background of the events we see around us.”