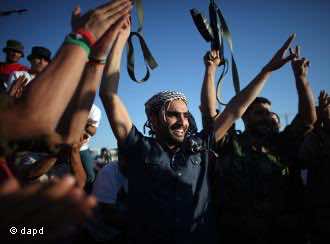 The heads of France and Britain, leaders of the NATO bombing campaign to oust Moammar Gadhafi from power in Libya, have visited the country to meet with representatives of the rebel-led government they helped install.

British Prime Minister David Cameron and French President Nicolas Sarkozy completed a lightening-fast visit to Libya on Thursday, as the new leaders they helped put into power continued the fight to win control over the last pockets of resistance in their country.

The two men were greeted at Tripoli’s Metiga airport by Mahmoud Jibril, the vice-chair of Libya’s National Transitional Council (NTC), and were quickly taken to the Tripoli Medical Center, where they toured three of the hospital’s wards.

Crowds of medical staff gathered to shake the Cameron and Sarkozy’s hands and thank them for their countries’ support.

“It’s extremely moving to see young Arabs turn towards these two great Western countries to say, ‘Thank you,'” Sarkozy told reporters in Tripoli. “This proves that conflict between the West and the Middle East is by no means an inevitability.”

“We stand ready to help, but we want to know what it is you most want us to do,” said Cameron. “This is the moment with the Arab Spring that could become the Arab Summer and we see democracy advancing in other countries, too.”

France and Britain took the lead in a months-long NATO bombing campaign that provided crucial support to the rebels attempting to oust Colonel Moammar Gadhafi. The countries’ leaders are popular among the rebels in Libya, where graffiti slogans like “Merci Sarkozy” and “Thank you Britain” are a common sight.

The visit comes at a time when the National Transitional Council is struggling to transition from leading a military rebellion to a peaceful and legitimate democratic government. As the security situation in Tripoli remains precarious, the rebels sought to reassure the visiting leaders that they would be in good hands.

Despite having successfully overtaken Tripoli and pushed Gadhafi into hiding, the rebels are still battling for control of isolated pockets still loyal to the former leader, namely in Gadhafi’s hometown of Sirte and the town of Bani Walid, southeast of the capital.

“There will be a lot of fierce fighting in this area,” Abdel Jalil told BBC television. “We ask for support to get the right equipment in order to conquer these troops and to proceed further south to try and capture Colonel Gadhafi and his family.”

Scores of cars were seen leaving Bani Walid on Wednesday after rebels broadcast a message warning the town that they would soon be coming to take control.

“There is a lot of random shooting,” said Fathalla al-Hammali, 42, driving away from Bani Walid with his three young children. “It is much safer for my children to leave. Gadhafi militia men do not want to negotiate.”

Another question entirely is where Gadhafi is hiding. He has not been seen in public since June, and his defiant messages broadcast on television and radio have become less and less frequent.

Reading a letter broadcast on Syria-based Arrai TV, Gadhafi called on the UN Security Council to protect his hometown of Sirte from what he called “atrocities” expected by NATO.

“If Sirte is isolated from the rest of the world in order for atrocities to be committed against it, then the world has a duty not to be absent,” he said. The call was a far cry from reality, as Gadhafi himself is wanted by the UN’s International Criminal Court for crimes against humanity.

Speaking on a satellite phone to Reuters news agency, Gadhafi’s spokesman, Moussa Ibrahim, said that the leader was not giving up.

“The leader is in good health, in high morale… of course he is in Libya,” he said, declining to reveal his own location. “The fight is as far away from the end as the world can imagine. We are still very powerful, our army is still powerful, we have thousands upon thousands of volunteers.”