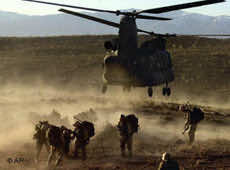 The truth, which has become something of a taboo, is that Osama bin Laden was a calamity for the world, as was George W. Bush. The latter dreamed of seeing his name go down in history, and 9/11 was an opportunity too good to pass up. Ten years after the attacks on the US, we should remember the victims of both men, writes Jürgen Todenhöfer

Ten years ago, Osama bin Laden committed three epochal outrages: He had 2,750 civilians murdered in the World Trade Center alone. He supplied George W. Bush with the pretext for two catastrophic wars. And, in passing off his personal terror ideology as Islam, he cast an ominous shadow over the image of this religion. No one has inflicted more damage on Islam than bin Laden. If the word Muslim means “pious”, then bin Laden was not a true Muslim.

As governor of Texas, George W. Bush had already dreamed of seeing his name recorded in the history books. 9/11 was an opportunity he did not pass up. Before the day had even come to an end, he indicated the direction he was planning to take by quoting Psalm 23 from the Bible: “‘Even though I walk through the valley of the shadow of death, I fear no evil for you are with me.’ We go forward to defend freedom and all that is good and just in our world.”

Although none of the perpetrators came from Afghanistan, President Bush set his sights on a war against this country. A raid à la Abbottabad was not an option for him.

Raids don’t guarantee you a place in the history books. As the Americans bombarded Kabul, he promised: “We will not waver, we will not tire, we will not falter, and we will not fail. Peace and freedom will prevail.”

In the meantime, this war has claimed the lives of 10,000 civilians and 1,750 US soldiers. Peace and freedom have not prevailed, as the West wavers and falters. George W. Bush himself invented the pretext for his next war. He claimed that Saddam Hussein possessed weapons of mass destruction and links to Al Qaeda. And said it was his duty to protect the world from this threat.

This war also appeared to have been wrapped up rather swiftly. Positioned beneath a banner bearing the words “Mission Accomplished”, Bush explained: “When Iraqi civilians looked into the faces of our servicemen and women, they saw strength and kindness and goodwill. In the images of celebrating Iraqis, we have also seen the ageless appeal of human freedom. Everywhere that freedom arrives, humanity rejoices.”

But just who exactly is still rejoicing in Iraq today? Hundreds of thousands of Iraqi civilians and 4,500 US soldiers have paid for Bush’s war with their lives. Bush has tarnished the very same values that he was supposedly fighting for.

With torture in Abu Ghraib, keeping prisoners in cages in Guantánamo, the outsourcing of terror suspects to states that mete out torture, the bombardment of Afghan wedding parties as well as huge curbs on the civil rights of his own people. Is Peter Ustinov right when he says that war is the terrorism of the rich? Terror in the name of virtue? Is Bush really a Christian?

Over-estimating the civil courage of our generation

In its judgment of the crimes of World War II, the International Military Tribunal at Nuremberg declared: “To initiate a war of aggression (…) is the supreme international crime, differing only from other war crimes in that it contains within itself the accumulated evil of the whole.”

As chief prosecutor Robert Jackson formulated it at the time: “We must never forget that the record on which we judge these defendants today is the record on which history will judge us tomorrow.” He over-estimated the civil courage of our generation.

When it comes to the legal classification of anti-terror wars, our elites remain sheepishly silent. The terrorists are always the others. This is their mantra: “Not every Muslim is a terrorist, but every terrorist is a Muslim.” But this is also incorrect. According to Europol, 249 terrorist attacks took place in the EU in 2010. Only three of these had an “Islamic” background. Most of the acts of terrorism were committed by pro-autonomy groups such as ETA.

“The United States ran out of monsters”

Those who wage war against terrorism remain unmoved by the fact that Al Qaeda was a totally insignificant force during the Arabellion. Don’t forget it was difficult enough to find a feasible enemy following the demise of the Soviet Union.

As Colin Powell complained anxiously at the time, “the United States has run out of monsters”. Until the mass murderer Bin Laden came along and played the useful idiot to Bush Jr. Enemies like this are just too good to pass up.

The truth, which has now become something of a taboo, is that Osama bin Laden was a calamity for the world, as was George W. Bush. On 11 September, we should remember the victims of both men. For a child, it is of little consequence whether he has been torn to pieces by an “Islamic” suicide attacker or a “Christian” bomb. And whether the perpetrator’s name is Osama bin Laden or George W. Bush.

Jürgen Todenhöfer was a member of the German parliament for 18 years, and served as CDU/CSU spokesman for development policy and arms control.

Translated from the German by Nina Coon