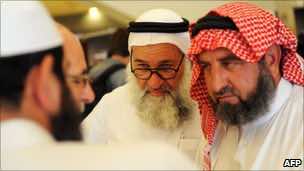 Members of Syria’s opposition groups have chosen 140 people to form a “national council” after a meeting held in Turkey.

The council aims to organise and give a public face to protests against Syrian President Bashar al-Assad.

It will also aim to co-ordinate the opposition’s policies against the Syrian leadership.

Turkey used to be a close ally of Syria, but has recently joined calls for Mr Assad to implement reforms.

At the meeting, 70 names were read out from a list of 140, as at least some of the rest cannot be named, possibly because they are inside Syria, says the BBC’s Jonathan Head in Istanbul.

Others are in exile.

The opposition groups seem to have finally agreed to what is effectively an embryonic Syrian national assembly, says our correspondent.

For the first time, it has the full backing of all opposition groups inside and outside the country, and will now represent the opposition, he adds.

Yasser Tabbara, another member of the council, said it had not yet elected a president.

“We are in a democratic process. This is an inaugural meeting,” he told the AFP news agency.

An activist told the BBC that representatives from Syrian minorities were included, in response to their growing concern over what might happen after the ousting of President Assad, who is a member of the minority Alawite community.

On Wednesday, Syrian security forces were reported to have launched a new operation against opponents of Mr Assad’s regime in the north-west of the country.

Foreign reporters are not being allowed in to Syria so news organisations are largely dependent on unverified amateur video and reports by rights groups.

According to the UN, more than 2,200 people have been killed in Syria since anti-government protests began more than five months ago.

The government says hundreds of its personnel have been killed.

The international community has urged the Syrian president to stop targeting civilians.

The government insists that it has a political reform programme in place, but opposition leaders say there can be no free and fair elections while the ruling Baath party is in power.