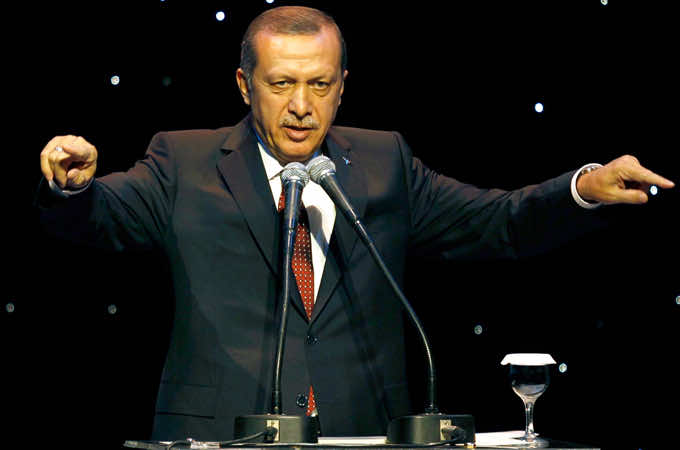 Whatever else you want to say about Recep Tayyip Erdogan, the Turkish prime minister has timing. Just days before the Palestinian Authority takes its statehood application to the UN, just days after fierce Egyptian protests drove Israeli embassy staff out of the country, and one week after Turkey dramatically downgraded its relations with Israel, Erdogan kicked off an “Arab uprisings” tour to a hero’s welcome in Egypt. As Erdogan stepped off a plane to cheers and unity chants – Time magazine reported he was “greeted like a rock star” – it was clear the intention was to signal Turkey’s positioning at the heart of a new regional politics.

Central to this regional dynamic (and much more so, now that public sentiments are no longer muzzled by repressive rulers) is the Palestinian struggle. Calling it an “obligation” to support the Palestinian statehood bid, Erdogan told a meeting at the Arab League’s headquarters in Cairo that “the Palestinian flag has to flutter at the UN”.

This scenario combines all of Israel’s fears in one setting: two significant and previously manageable Muslim allies, with whom relations have deteriorated, meeting to discuss strategic ties, while at the same time backing the Palestinian proposal, about which Israel is already in a panic.

The Palestinian subject is not only key to the Arab world, it is also central to Turkey’s rising popularity.

While regional leaders were seen as compliant to Israel, Turkey’s prime minister vented opposition to Israel’s Gaza assault of late 2008 by storming off stage at a debate in Davos, telling Israel’s president Shimon Peres: “You know how to kill people”. Then, as Mubarak’s regime in Egypt was still helping to enforce the Israeli siege on Gaza, Erdogan stood out for his sharp criticism of the blockade and Israel’s storming of a Gaza-bound aid flotilla last year, which killed nine Turkish people. The depths of anger at Israel’s actions roared through his fierce words, evoking the ten commandments, in June last year: “I’ll say [it] again. I say in English ‘you shall not kill’. Did you still not understand? So I’ll say it to you in your own language. I say in Hebrew, ‘Lo Tirtzakh’.” Turkey cut diplomatic ties after Israel refused to apologise for the flotilla deaths.

In taking this stance, Turkey has filled a chasm created by the absence of Muslim countries prepared to challenge Israel’s policies with more than just rhetoric. Turkish flags are now raised all over the Palestinian territories, imports of Turkish goods and ratings for Turkish TV soaps have spiralled across the Middle East, and Arab tourists have flocked to Turkey in numbers that have boomed this year, partly because Arab uprisings have put travellers off usual holiday destinations.

Meanwhile Egypt, shaking off a regime that compromised its potential regional punch, is also keen to signal changes. The interim military council said it would honour Egypt’s agreements with Israel, but recent protests have shown that the Egyptian public wants to see those agreements revoked, or at least redrawn.

In Cairo, the strands came together as Erdogan gave a crowd-pleaser speech about uprisings in the Middle East and democracy in the Arab world. He also pledged to boost trade with Egypt from current levels of $3bn to $5bn, which would neatly plug the Turkish shortfall created by ditching trade ties with Israel. Turkey is viewed as a financially robust, politically articulate model; its Islamist AKP party, running a secular democracy, could provide the Egyptian Muslim Brotherhood with a template – although analysts have cautioned that Egypt’s Islamists, despite the warm welcome for the Turkish prime minister, squirm at his tolerance for secularism.

Meanwhile, pro-democracy protesters, worried that Egypt’s interim military council is derailing the revolution, could be cheered by Erdogan’s capacity to subordinate a power-hungry Turkish military.

But there are also reservations. Some analysts hear too much aggressor volume in the multiple threats emanating from Turkey in the week since diplomatic ties with Israel were downgraded. In that time, Erdogan has talked of military warships accompanying aid boats to Gaza and threatened naval action against Cyprus if it allows offshore drilling for gas at a site Turkey claims to be disputed. Also, if Turkey is to be taken seriously as a champion of Arab uprisings, it would help if the country did not cherry-pick its causes – supporting the Palestinian right to self-determination, while ignoring Kurdish attempts to exercise that same right.

Yet at a time when Turkey does galvanise goodwill on the basis of the Palestinian cause, the subject is tellingly absent from Israel’s internal conversation. The occupation has disappeared from public and media debate in Israel; it is hidden behind the separation wall in the West Bank and barred from view in Gaza, where Israeli journalists are not allowed to visit and so can’t report on. An editorial earlier this week in the liberal Haaretz newspaper urged that Israel must “propose real policies and solutions to the conflict with the Palestinians” if it wants to hang onto regional ties. But this stood out as a lone voice. A more common view appeared in a piece entitled “Why Do They Hate Us?“, from a more widely circulated paper, which ran through possible reasons for the animosity from Egypt without once mentioning the words “Palestinian” or “occupation”.

Speaking from Cairo about the Arab revolutions, the Turkish prime minister said: “Some countries in the region cannot read the changes that are happening, on top of which is Israel”. Turkey, in stark contrast, seems to be reading those changes very well.

Rachel Shabi is a journalist and author of Not the Enemy: Israel’s Jews from Arab lands.