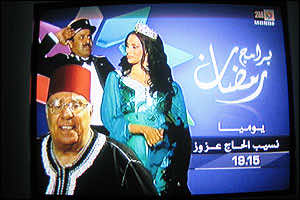 For decades, waves of frustrated Moroccans have been immigrating on perilous boats to never land, fleeing the whips of poverty and all colors of marginalisation. The same story is being repeated during these blessed days of Ramadan with a slight substitution of boats by satellite dishes; Moroccans from all walks of life are boycotting their local television channels and immigrating to the other Arab and Gulf ones, this time fleeing the dullness, and the denseness of the pathetic programs being aired before breakfast, that instead of stimulating the fasters’ appetite, nauseate them. If only I had a vaccine against stupidity.

Watching only a few moments of these so-called comedy programs is real psychological torture for viewers. You may even feel the need to throw-up due to the filth and the bitterness of the content of these distasteful and frivolous sitcoms. Personally, the pain that I feel when watching that rubbish is no less than when watching the atrocities in Libya and Syria. All what I watch is just actors and clowns’ shouting, bounding and quivering non-stop and with no clear message. They think such childish behaviour and boring scenarios may produce laughter. Instead they arouse fury and ire among viewers, of course if they bother watching until the end.

The reprehensible programs such as «machi lkhatri», «zin f tlatin», «tkbr wtanssa», «lfhaymia»… unveils the reality that there is a very deep crisis of creativity and imagination among those who were confided with the mission of entertaining and educating television viewers. These so called comedians are unable to come up with stories, contexts, scenarios and situations that can elicit even a smile. Instead they resort in each scene to shrieking, convulsing their bodies, mispronouncing words or using vulgar expressions and borrowing rural accents in an attempt to make us laugh. Those clowns should bear in mind that they are addressing people who enjoy critical thinking skills and a great sense of humour.

Moroccans, in the midst of deplorable circumstances and deepening social depression, have developed in their disposition, traits of sarcasm, irony and humour because without these traits they would, long ago, have committed suicide. I believe that a life without humor is like a wagon without springs, jolted jerkily by every pebble in the road. Therefore, any tv product should respect Moroccans’ intelligence and abide by their cultural and moral values. The kind of humour that we want is the one that makes us laugh for a minute and think for five minutes, not like these disgusting derisory puppet-like shows.

But I wonder how, in light of these ridiculous programs, that are actually plots to stupefy the Moroccan mind, block its intellectual development and downgrade our artistic awareness and appreciation of our surroundings, Moroccans have proven immune to appeals to ignorance and resistant to senselessness and backwardness. The proof is in the indefinite number of satellite dishes on Moroccan houses and slums, revealing that Moroccans are fed up with their local TV programming and have obtained for themselves visas to be entertained, to explore and to learn.

*Mahmoud Seddik is a contributor to Morocco World News. He also has his own blog: www.mahmoudsadik.blogspot.com.