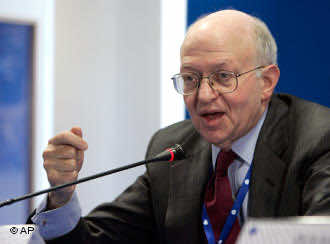 In an article published five years before the launch of the euro Martin Feldstein wrote that the new currency could lead to severe friction in Europe. Now the noted economist says several countries should leave the euro.

Deutsche Welle: In your prescient article from November 1997 you predicted that a European Monetary Union (EMU), which led to the introduction of the euro as a currency in 2002, could cause serious conflict inside and outside of Europe. Looking at the current crisis, do you feel vindicated?

Martin Feldstein: I am not sure I would use the word vindicated, but I certainly think that the article did point to problems on the economic side and the political side which we have seen happen, especially in the last few years.

In a nutshell for those who may not be familiar with your original article, can you just describe your thesis briefly?

It’s probably worth starting on the economic side rather than on the political side. The problem that I saw then and that seems to be true is that establishing a single currency, a single exchange rate for such diverse countries wouldn’t work.

People at the time said, look the United States has a great deal of diversity and yet you operate with a single currency. So why can’t it work in Europe. And what I emphasized was that in the United States we have a very geographically mobile labor force, so that if demand falls in one place people move elsewhere in the country very easily. That’s obviously harder to do in Europe with differences in languages, traditions and unions. We have a much more flexible labor market, the wages are much more flexible in the US.

It was hoped in Europe that would happen as a result of the creation of the monetary union, but it did not. We have a fiscal system which automatically transfers funds to states or regions in which unemployment is relatively high. All of these things are missing in the European scene.

Moreover, because each country has an independent ability to set taxes and spending and therefore fiscal deficits and yet there is a single currency and a single exchange rate what we now see and what was predictable is that a country could borrow in euros, and unless it was a very big country, that would have a very small impact on the interest rate and on the exchange rate. Therefore there wouldn’t be any market signal or market feedback to indicate that a country’s current account deficit or its budget deficit in borrowing are getting out of line. And that of course has been the key to the current crisis.

What were your political problems with the monetary union?

I saw that once that started to happen, all these economic problems would lead to disagreements about what is the appropriate policy. So at some point Germany was relatively weak, needed a low interest rate, but at that time a low interest rate was not what was appropriate for Ireland or Spain and led to housing booms.

The European Central Bank (ECB) can only set one interest level for the entire region and given the weakness in Germany and some of the other normally stronger countries and given the ECB’s rule of dealing with Europe as a whole, it had to give more weight to the countries that needed low interest rates. That ended up creating greater problems in Spain and Ireland. And know of course it’s the reverse where in order to deal with potential inflation the ECB is keeping rates high at a time when some countries are seeing their GDP not grow at all or actually decline. That’s a situation in which there are going to be political tensions among the countries because of disagreements about that.

What has led to even bigger problems as your audience will know is that the problems of Greece and Portugal and others that need support from the European Union if they are to avoid economic defaults, need support from the ECB contrary to the Maastricht rules and so again not surprisingly many Germans are opposed to the kind of policies that are taking German money and lending it to the weaker countries. And of course the weaker countries like Greece are very upset about having to tighten its belt and to sell national assets and so on. They are in effect blaming the people who are helping them. They are blaming Germany and others.

In your article you cited the very different traditions of Germans who for historic reasons want a very strong currency and demand price stability and other Europeans who don’t share those goals as a main philosophical hurdle for a common currency. Do you still believe that these are true and can those problems be overcome?

I think they are still true. That’s why you are hearing calls for the ECB to lower interest rates while in Germany there is a respect and an eagerness to maintain price stability and a willingness to accept high interest rates in order to achieve that. So I think there are these differences.

Europe’s crisis has triggered a rift within Germany government coalition where Germany’s vice chancellor and economics minister for the first time said that discussing a Greek default should no longer be a taboo only to be rebuked for his remark by the chancellor. Who is right and how do you rate Berlin’s handling of the crisis?

I think the key fact is that Greece is going to default. There’s no way that Greece can afford to service the debts it’s incurred especially at the interest rates that the markets require. So the deal that is currently being negotiated to try to get private Greek bond holders to swap bonds is in effect a default. They will get 80 cents on the dollar and so they will take a 20 percent hit in terms of the value of their bonds. But I think that is just the beginning. I think that there will be much larger defaults because Greece is not going to be able to deal with this.

As far as Germany goes, I think Germany has tried to stick to the original concept of the euro, the Maastricht rules and has discovered that if they do that, that countries like Greece and maybe others will default. So Germany is being pushed into a more activist role, using the ECB, supporting the FSF (Financial Stability Fund) to help these peripheral countries. But it is not taking the lead in doing that because I think where the market is dragging Germany is not the direction the German public as I understand it would like to go.

So how can this crisis be stopped and perhaps even more important, who can stop it?

I am not sure that it can really be stopped in the sense that I think Greece is defaulting. And if that happens, people will be saying that it is tragic and painful, but I don’t think that’s true. We have seen defaults around the world in many countries and it helps them to clear their books and the amount that they owe will not be devastating. But I think it will then lead to a default by Portugal.

What we don’t know is just how weak the situation is in Italy and in Spain. You don’t get an honest evaluation of the budget situation and the prospects and the banks in either of those countries.

Should Greece then leave the euro, is that a step you would support?

I think it would be in Greece’s interest. Because I think that even if the debt situation gets solved temporarily, even if they are able to both in terms of the assistance that they get from others and their ability to just outright default on some of the debt, the question is what happens after that. Greece has not been able to achieve current account surpluses year after year and they don’t have the productivity growth and the market growth that Germany does. So how can they become more competitive?

In an economy with a floating exchange rate, with an ability to adjust their exchange rate or to allow it to respond to the market, the Greek exchange rate would gradually fall over time and that would make their goods more competitive. But with a fixed euro exchange rate there’s nothing that can be done along those lines.

You have always been a euro-skeptic, so do you think the euro will be around five years from now?

That’s a very hard thing to say. I think the most likely thing is that the euro itself will survive, but that some of the countries may leave the euro and go back to their domestic currencies. I have suggested in the past that Greece might take a temporary leave of absence, so that they agree with the other EMU members that they are reverting to let’s call it the new Drachme and that they will try to get their house in order.

And once their prospects look good and their debt ratios are down and their deficit is down then they will be able to apply for membership again. You could extend that principle certainly to Portugal and may have to do it to others.

Give us your prediction: How will Europe look economically and politically 15 years from now?

I am not sure despite all the nice things you said about my forecasting ability I can look ahead for 15 years and say what’s going to happen to Europe. But I think what we are most likely to see is that not all the countries that are currently in the monetary union will remain. And I’ll be surprised if Europe does move to the kind of fiscal system that the United States has where there is a central fiscal authority that sets tax rates and therefore redistributes money significantly among the European countries.

Martin Feldstein is one of the most distinguished US economists. He is professor of economics at Harvard University and served as chairman of the council of economic advisers and chief economic adviser to President Ronald Reagan from 1982 to 1984. Feldstein was president and CEO of the National Bureau of Economic Research until 2008. He was appointed to the Foreign Intelligence Advisory Board in 2006 by President George W. Bush und as a member of the Economic Recovery Advisory Board in 2009 by President Barack Obama.