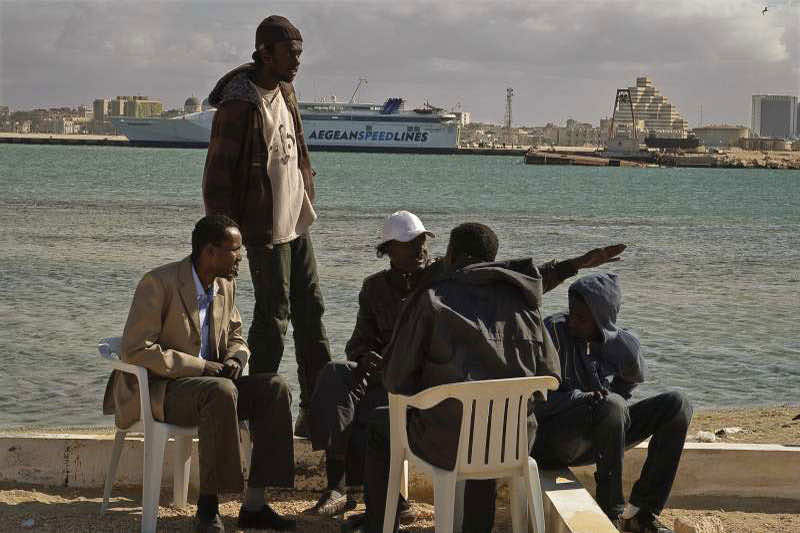 The United Nations refugee agency said today it remains concerned over the plight of migrants and refugees in Libya and is working with its partners and the transitional authorities in the North African country to improve protection and other humanitarian services for the foreigners.The UN High Commissioner for Refugee (UNHCR) and the International Office for Migration (IOM) have restored their telephone hotline services in the Tripoli area and received large numbers of calls from refugees and migrants reporting numerous protection incidents, including detention and a need for food assistance, the agency’s spokesperson, Adrian Edwards, told reportersin Geneva.UNHCR staff have carried out a series of field visits to areas where refugees and asylum-seekers are living in the Libyan capital, Tripoli, and met with a group of 60 Sudanese from Darfur, some of whom were injured in the conflict, but said who they had stable relations with the local community, Mr. Edwards added.

A group of Eritreans reported that two of their compatriots were killed when they were caught in crossfire during the conflict.

The Stabilization Team of Libya’s National Transitional Council (NTC) is coordinating with the relevant ministries to prepare a strategy that would include public awareness, the issuing of temporary identification documents for migrants and the exploration of ways of providing shelter and other services to vulnerable asylum-seekers and refugees, according to Mr. Edwards.

UNHCR has also been contacted by the local military council in Zintan, Nafusa Mountains, asking the agency to identify solutions for a group of third-country nationals, reportedly Somalis.

The agency has also heard from a group of Somalis fleeing the Sabha area, currently surrounded by NTC forces. IOM and UNHCR are coordinating efforts to evacuate that group to Tripoli. UNHCR has also made a