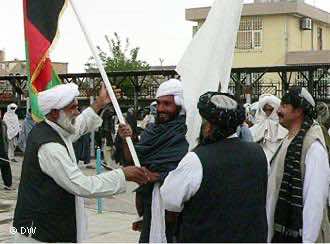 The US has endorsed plans by the Taliban to open a political headquarters in Qatar just three days after insurgents carried out attacks in Kabul, including assaults on the US and NATO headquarters, which left 15 dead.

Washington’s endorsement of the office of the self-styled Islamic Emirate of Afghanistan is widely seen as the next step in behind-the-scenes negotiations between the US, the government of Afghan President Hamid Karzai and the Taliban designed at opening up formal peace talks and finding a solution to the decade-long conflict. The office is expected to be established by the end of the year.

It is thought that by establishing an official presence in the Gulf state of Qatar, more effective lines of communication can be opened up between the US and the Taliban away from external interference, particularly from Pakistan.

“Some kind of legalized office where Taliban representatives can function is a prerequisite to talks getting anywhere,” Dr. Stephen Biddle, a senior fellow for defense policy at the Council on Foreign Relations in Washington, told Deutsche Welle. “So this is a promising development. But it’s an initial step.”

Xenia Dormandy, a US foreign policy and AfPak expert at Chatham House said it was important for the Taliban to gain a legitimate bargaining position.

“Providing the Taliban with a legitimate face is a necessary step to a long-term political solution. It does not imply that the final solution is defined or even roughly laid out. Everything is still very much in play and all parties could benefit from this step. It is not a zero sum game.”

The choice of Doha, the Qatari capital, for the Taliban office – a location “outside Pakistan’s sphere of influence” – is believed to have been a condition made by the US in response to the Taliban’s demand for the creation of its first internationally recognised representation since it was ousted from power in Afghanistan in 2001.

According to an unnamed western diplomat quoted in The Times newspaper this week, the office would not be an embassy or a consulate and the Taliban would not be allowed to use the office to raise funds. “It will be an address where they have a political office,” the source said. “It will be a residence where they can be treated like a political party.”

US State Department spokeswoman Victoria Nuland refused to comment on the US endorsement, going only so far as to reconfirm that the US was working on an Afghan-led process of Taliban reconciliation and that such a process had “many facets.”

“The US has certain red lines,” Nuland told a press conference this week. “Anybody reconciled has to accept the Afghan constitution, has to renounce violence, drop weapons and support human rights in keeping with international standards.”

It appears that just as the West is unwilling to give up its military options while pursuing dialogue, the Taliban is intent on doing the same, although the recent attacks in Kabul have been linked to the Pakistan-based Haqqani network which may be attempting to derail any progress on a political settlement

Despite an upsurge in violence and the subsequent US troop surge in 2010, negotiations between the US and other western powers with the Taliban over a possible political settlement in Afghanistan have been underway for most of this year, as confirmed by President Karzai in a statement in June. Karzai’s High Peace Council, set up in 2010, is leading the talks, backed by US and other Western diplomats.

The UN has also offered its assistance and advice if and when direct and formal negotiations with Taliban insurgents begin.

However, progress has been slow and an unnamed US source claimed this week that efforts to engage with the Taliban have actually been sabotaged by the Karzai government which allegedly leaked details of clandestine meetings between US officials and a personal emissary of Taliban leader Mullah Mohammed Omar in Europe, sending the contact into hiding.

With the channels to negotiations seemingly blocked, leading Afghan and Western diplomats have suggested that increased military efforts can help bring the Taliban closer to the negotiating table.

Ryan Crocker, the US ambassador to Kabul, said last week that the Taliban must feel “more pain” from increased military pressure before progress can be made in peace talks.

“The Taliban needs to feel more pain before you get to a real readiness to reconcile,” Crocker said in an interview with the Wall Street Journal, adding that efforts to talk peace with the Taliban had so far failed to produce concrete results. Karzai’s High Peace Council had yet to make a breakthrough, Crocker said, saying that the two sides “are still just kind of feeling each other out at this stage.”

“The more success that the Afghan government, the International Security and Assistance Force (ISAF) and US forces have, the weaker the Taliban position becomes and the more likely they are to negotiate,” said Dormandy.

In addition to the slow progress in starting peace negotiations, International Security and Assistance Force (ISAF) officials are concerned over the “modest” progress being made in the reintegration of low-level Taliban fighters into the Afghan army.

Figures show that about 10 percent of insurgents – 2,418 out of roughly 25,000 – had switched sides since the “reintegration” program was launched last July.

“Elements of the Taliban have shown a willingness to negotiate, and some have already crossed over to the Afghan Government,” said Dormandy. “It is unclear today, however, whether those willing to negotiate have sufficient leverage and power to bring the majority of the organization over with them.”