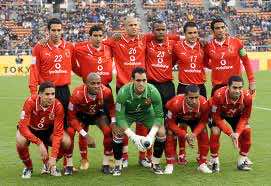 Six-time champions Al Ahly have crashed out of this year’s Caf Champions League after they could only draw 1-1 at home with Esperance of Tunisia in a final Group B match Friday night. Ahly thus finished the group phase of the club competition in third place with seven points, while Esperance won the group having recorded 10 points.

Ahly’s elimination was highlighted by the 3-1 loss suffered by Wydad Casablanca at MC Alger of Algeria in the other group game. Wydad finished with seven points but qualified ahead of the Egyptian champions by virtue of a better goals difference.

Amid heavy security at the jammed Cairo International Stadium, the Red Devils of Cairo failed to put away several begging chances they created in this game. Ahly needed to win by two clear goals to progress into the semi-finals of the annual club competition.

However, in front of over 50 000 fans they fell behind through a header by Yaya Banana off a free kick on 17 minutes. The Cameroon youth international defender appeared to have found target from an offside position but the Sudanese referee allowed the goal to stand.

Ahly evergreen forward Mohamed Aboutrika restored parity nine minutes after the interval. The Egyptians then pressed ahead for more goals but Mohamed Fadl could only watch as his effort was cleared off the goal line and Mauritanian striker Dominique da Silva missed a clear opening towards the end of the encounter. In Algeria, hosts MC Alger shocked Wydad Casablanca of Morocco.

MC Alger led by three goals, a brace by Mohamed Babouche and a third by Herve Oussale in the second half. The Moroccans pulled a goal back via a penalty in the 79th minute converted by skipper Ahmed Ajeddou.

The Algerians finished bottom of the standings on five points.

The final semifinal ticket will be decided on Sunday, when Enyimba welcome Cotonsport in Aba and Al Hilal are guests of Raja Casablanca of Morocco.

Cotonsport and Al Hilal need a result to go through to the next round, where they will tackle Esperance.