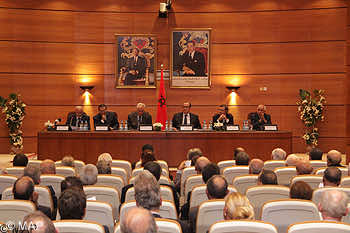 Moroccan Foreign Minister Taib Fassi Fihri called for expanding the Agadir initiative, which brings together Morocco, Tunisia, Egypt and Jordan, to make of the region not only a space of free trade, but also a participative framework to achieve an enlarged integration including all strategic, political and human rights issues.

Speaking, on Friday in Rabat, at the opening of the International Forum on democratic transitions and constitutional processes in the Arab world, the Minister recalled that Morocco was the originator, in 2001, of this initiative which remains open to other Arab countries in the Mediterranean region.

Morocco, he said, gives a special attention to Deauville initiative of G8 to support the momentum of democratic, economic and social reforms in the state parties to the Agadir agreement, giving the fact that the new Libya joined Deauville initiative.

“What happened in Egypt and Tunisia clearly proves that there is no economic and social development without democratic and political openness,” he said.

Arab societies, the Minister added, are able to come up with a system of values reconciling universal principles of democracy with local components and specificities.