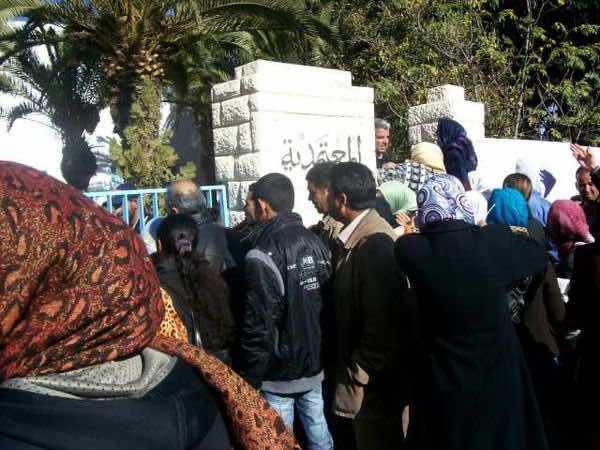 TUNIS: Five Tunisians tried to hang themselves after failing a competition to become teachers in the impoverished western Kasserine region, witnesses and media reports said.

The five mounted an improvised scaffold outside the local branch of the education ministry with ropes round their necks, witness Rachid Jabbari told AFP.

Rescued by a crowd of bystanders who had gathered, the five were taken to hospital, one of them with a head wound, Jabbari said.

“It was an act of desperation,” he said. “This first competition since the revolution was their last chance.”

Jabbari said the five, all in their 40s and unemployed, had been systematically refused jobs in the competitions organised under the ousted regime of Zine El Abidine Ben Ali, despite having qualifications.

The suicide attempt followed a sit-in by the five and others of several days in protest at alleged discrimination against their region in hiring civil servants, the official TAP news agency said.

The governor of Kasserine visited the five men in hospital before they were discharged, it said.

The suicide by immolation of a street vendor is credited with triggering the revolt that resulted in Ben Ali’s overthrow on January 14.

Since then unemployment has soared, from 14 percent in 2010 to 19 percent at the end of July according to official figures.

It is attributed to the arrival on the jobs market of some 80,000 graduates in July, and the return home of more than 30,000 Tunisians who fled the conflict in neighbouring Libya.

Despite efforts of the transitional government to preserve jobs and create new ones, some 10,000 have been lost and another 80,000 are threatened.