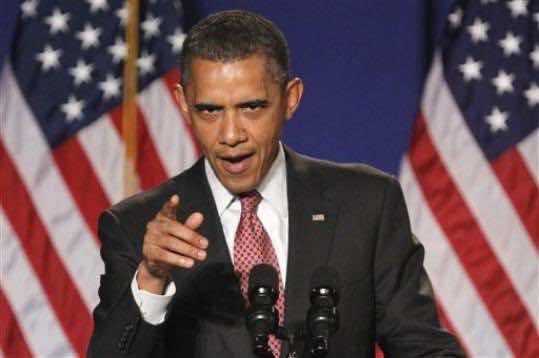 WASHINGTON — President Barack Obama once envisioned this would be the moment when world leaders would gather to herald a new state of Palestine.

What waits for him instead at the United Nations this coming week is closer to a diplomatic nightmare that may isolate the United States, anger Congress, deepen the Mideast divide and cloud the rest of his agenda.

Fed up with failed talks with Israel, the Palestinians plan to appeal directly to the U.N. for statehood. Obama is adamant that that approach will undermine the chances of a Palestinian state by ignoring the unresolved issues with Israel. So now he is in the unenviable spot of opposing an effort whose goals he supports and he’s nearly standing alone in doing so.

From the U.S. perspective, the options are not good.

Should the Palestinians press their case for full U.N. membership to the Security Council, as seems likely, the U.S. will veto it.

If the Palestinians go before the General Assembly for a lesser but still elevated form of member recognition, the U.S. lacks a veto there and will simply vote against it, placing it firmly in the minority and perhaps inflaming the Arab world.

American diplomats were making a furious effort to sway the Palestinians to drop their bid and restart talks with Israel over borders and security. But as the time grew short ahead of Obama’s scheduled arrival in New York on Monday, his administration already was trying to look beyond any U.N. action in hopes of influencing whatever comes next.

“This is lose, lose, lose,” said Andrew Exum, a senior fellow with the Center for a New American Security. “A resolution before the U.N. Security Council will hurt the United States with the Arabic-speaking world if Obama is seen as standing in the way. The Israeli government and the state of Israel will feel more isolated. And Palestinian frustration will only grow.”

That frustration is surely felt at the White House, too.

Obama is facing questions about his commitment to Israel and his backing among Jewish voters ahead of the 2012 presidential election despite a record of support for Israel that analysts say has been strong and fair.

He has not been able to sway Palestinian President Mahmoud Abbas to abandon a bid that Obama calls a distraction. Members of Congress are angry about what they see as the Palestinians’ end-run around Israel and warning of intervening themselves. The world has watched as Obama’s domestic fights with Republican lawmakers have undermined the standing of them all.

“There’s no question that he comes in with a perception, globally, that his hands are tied,” said Shibley Telhami, a scholar of Middle East policy and a senior fellow at the Brookings Institution.

On the sidelines of the gathering, Obama will meet Israeli Prime Minister Benjamin Netanyahu in hopes of finding a way to restart Mideast negotiations. The White House said it had no such talks to announce with Abbas.

Even if the U.N. action on the Palestinian bid takes place after Obama departs New York, it is already casting a shadow over his broader message.

Over a busy stretch of meetings and speeches on Tuesday and Wednesday, Obama will give attention to the uprisings that have tossed aside dictators and sped hope for democracy across North Africa and the Middle East. The president and the U.N. itself want to hold up the international intervention in Libya as a success story of unity and strategic might.

Yet Obama steps back on the world stage under the weight of Mideast peace expectations that he himself set with his U.N. address of last year.

“We should reach for what’s best within ourselves,” Obama said last September in pushing for a negotiated agreement on a sovereign Palestinian state. “If we do, when we come back here next year, we can have an agreement that will lead to a new member of the United Nations.”

Obama tried in May to inject some life by spelling out terms that could get both sides back to talking. He endorsed ironclad Israeli security and an independent Palestine that would be on the borders that existed before the 1967 war, in which Israel occupied East Jerusalem, the West Bank and Gaza Strip, as adjusted by land swaps agreed upon by both sides.

Obama intends to stick with those principles and keep pushing for direct talks.

U.S. and European diplomats have been scrambling for the past week to craft a formula to bring the two sides together and avert the U.N. showdown. Their efforts have thus far come to naught. But envoys from the international group of Mideast negotiators _ the U.S., the U.N., Russia and the European Union _ planned to meet again Sunday in New York.

“It’s a hard problem that’s taken, of course, decades to address,” deputy national security adviser Ben Rhodes said. “But I think our fundamental message is going to be if you support Palestinian aspirations, if you support a Palestinian state, the way to accomplish that is through negotiations with Israel.”

Most member-states at the U.N. hold such strong views on the Palestinian pursuit of statehood that it is hard to see how a speech by Obama will make much of a difference, said Mark Quarterman, a former U.N. official who studies global response to crises at the Center for Strategic and International Studies.

“There might be frustration, but no shame, in not making the progress you think you should make,” he said. “The problem is now the Palestinians seem to have lost patience and are moving forward through another avenue. It’s not a diminishment of the United States. It is a difficult process that is moving very slowly for a variety of reasons, some of which the United States has very little control over.”

Obama will address the world body on Wednesday.

He told a group of reporters recently that the fundamental challenge is the same: Neither side has made the compromises necessary to achieve peace.

“This issue is only going to be resolved by Israelis and Palestinians agreeing to something,” he said. “What happens in New York City can occupy a lot of press attention, but it’s not going to actually change what’s happening on the ground.”