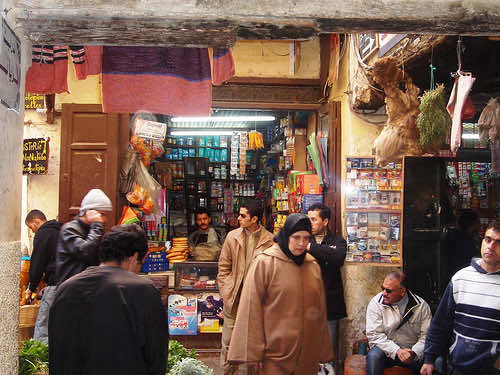 Moroccans are keeping abreast of the recent uprising that toppled Tunisia’s president-for-life Ben Ali. Several factors that triggered Tunisians’ rebellion are also present in Morocco: soaring unemployment among educated youth, sweeping corruption, nepotism and monopolization of the country’s wealth by a few.

In Morocco, as well, if your family name is not of significance, it is very difficult to ascend the social and political ladder. It will hinder you from gaining, among other things, an academic degree or acquiring a professional skill. Many past and current politicians, military officials and businessmen reached their status by taking advantage of the position of a member of their extended family. They benefited as sons, grandsons, sons-in-law, brothers-in-law, or as nephews of a well-placed kin. Some seized the opportunity to obtain valuable jobs, others to boost their businesses and some to wield political power.

The Fasi families, the Benise’s, the Benani’s, the Benchakroun’s, the Elmarnisi’s, the Bensouda’s, the Iraqi’s, the Skali’s, the Tazi’s, … are all of Fez origins and most of them were or are members of the ruling Independence Party, or by its Arabic name, Istiklal. They made their fortunes thanks to the privileges offered by French colonial authorities during colonization, which were  extended to them following independence.

The case of the “Fasi” family is a vivid example of how crucial familial ties are to social and political ascension in contemporary Morocco. The current government consists of three ministers from the Fasi family: Abbas Elfasi, the Prime Minister, is the son-in-law of  Alal Elfasi the former head of the Istiklal Party; Tayb Elfasi Alfihri, the Minister of Foreign Affairs, is Abass Elfasi’s nephew; and Yassmina Baddou, the Minister of Health, whose father Abd Rahmane Badou, was a minister in the 70s.

Other Fasis occupy no less sensitive positions. Yassmina Badou’s husband, Ali Elfasi Elfihri, is both the General Director of the “Office National de l’Eau Potable” and the “Office Nationale de l’Electricité,” as well as the President of the “Fédération Royale Marocaine de Football.” He is also the brother of Tayb Elfasi Elfihri and Othman Fasi Elfihri, who is the General Director of the “Société Nationale des Autoroutes du Maroc.” And all the three fortunate men are current Prime Minister Abass Elfasi’s nephews. The Fasi family tree is intricately interwoven through marriages whose aims are to secure continuity, inheritance and fortune.

Morocco’s economy will not attain competitiveness and be able to catch up with the rest of the world unless productive, qualified and talented citizens are given fair chance and allowed to serve their country. Nowadays, if a competent candidate does not have a “prominent” family name, they are likely to have their hopes dashed and end up protesting in front of the parliament with ever larger hordes of fellow unemployed graduates.

The Moroccans who were fortunate enough to immigrate overseas and get an education are currently running some of the most prosperous companies and organizations in the US and Europe, where their capacities are valued and their dignity is respected.

Luckily, Moroccans have not lived under a Tunisian style tyranny and dictatorship. However with high unemployment among the educated, inequality in how opportunities are provided, and unless credible reforms are implemented in a timely manner, Moroccan disenfranchised youth may, one day, rise up against the ‘Fassi’ the same way the Tunisians have done against the “Trabelsi”.

*Mahmoud Seddik is a contributor to Morocco World News. He also has his own blog: www.mahmoudsadik.blogspot.com.