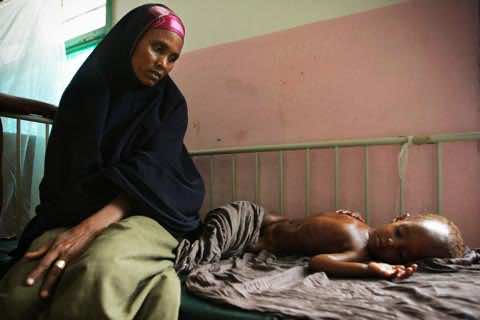 Images of starving Somalis have shaken the conscience of the world: stomachs flattened by hunger, sagging flesh and noses dripping in mucus, fed on by opportunistic toilet flies. And death is lurking. This is the picture of many of the living in Somalia, who look to humanity for help.

Jerry Rawlings, former Ghanaian president, wept inconsolably on Channel 4, a British television channel, as he recounted his experience after visiting Somalia in July. Mr. Rawlings, who is the Africa Union high representative to the drought- and war-ravaged country, begged the world for a “miracle of compassion” and urged it to “focus on tackling this unfolding catastrophe if we are to prevent further needless loss of life.”

The UN in July officially declared famine in five regions of Somalia — Mogadishu, Afgoye, Middle Shabelle, Lower Shabelle and Southern Bakool. Tens of thousands of shallow graves litter these regions. So far some 29,000 children under the age of five are among the buried. By mid-August, 400,000 Somalis had made lucky escapes to the Dadaab refugee camp in northeastern Kenya, now reportedly the world’s largest. The UN Food and Agriculture Organization (FAO), which monitors trends in global food prices, adds that up to 1,500 people move daily across the border to the Dadaab camp. Somalia’s malnutrition rate is 50 per cent, the highest in the world, according to CARE, a humanitarian charity.

UN Secretary-General Ban Ki-moon sounded the alarm bells in early July, prodding the world to act speedily to prevent thousands more from dying. Mr. Ban’s widely published op-ed narrated the story of Halima Omar, a Somali woman, who lost four of her six children. Halima said: “There is nothing worse than seeing your own child die because you cannot feed him.”

Somalia is in particularly dire straits because conflict, drought and high global food prices have exacerbated the humanitarian situation. The Al-Shabaab militia group, with links to Al-Qaida, controls southern Somalia, is preventing aid from reaching 3.6 million people (nearly half the population), of whom about 1.4 million are severely affected by the drought. According to the Human Rights Watch, the militia group considers aid agencies as “infidels,” adding that “abuses by Al-Shabaab and pro-government forces have vastly multiplied the suffering from Somalia’s famine.” The WFP is currently investigating a recent theft of food aid, with accusing fingers already pointed at both pro-government forces and elements of Al-Shabaab.

The entire Horn of Africa is experiencing an acute food crisis. According to Mr. Ban, 12.4 million people in the region are in desperate need of food aid. Uganda has had four successive poor harvests. In Kenya maize crops are 28 per cent of their normal average; only Nairobi, Mombasa and Kisumu have experienced rainfall, and 80 per cent of the country is semi-arid or arid. In Ethiopia and Eritrea crop losses are up to 75 per cent in some areas. And skyrocketing global food prices affect import-dependent Djibouti and Somalia.

The UN’s World Food Programme (WFP) is dropping vitamin-fortified biscuits in the most affected areas, literally rescuing the hunger-stricken from the brink of death. Yet, there are thousands more too weak to chew the biscuits. This category must first receive nutrients by intravenous means to stay alive.

Aid inflows are currently short of what is required to stem the tide of deaths. In August, only 48 per cent of the $2.5 billion needed had been received, says Mark Bowden, the UN coordinator in Somalia. “We’re worried that people are going to die in the next month or so and inevitably more areas will slip into famine.” There is urgent need for the remaining $1.3 billion. The Security Council has urged members to contribute to the UN consolidated appeal for Somalia and expressed “serious concern that the appeal is not fully funded.”

The US has led in donations. Secretary of State Hillary Clinton announced on CBS, a television network, that US support for relief efforts has topped $500 million. “The situation breaks my heart,” Ms. Clinton said of Somalia, promising that US support will continue in diverse ways. Kenyan bloggers, Kenya4Kenyans, have taken advantage of the Internet and mobile phone technology to raise awareness of the Somalia famine. Already, they have raked in €10 million to support victims.

The unfolding catastrophe did not come as a surprise – at least not to the FAO. In August 2010, the FAO issued a drought warning. And between October and December 2010, characterized as the driest season in 60 years, the FAO again warned of calamitous crop prospects for the region.

The international community has been slow to respond, prompting Oxfam, a UK charity, to describe the situation as “a catastrophic breakdown in the world’s collective responsibility to act.” The FAO explains that humanitarian crises such as worsening drought in the Horn of Africa are considered “slow-onset,” and generally get “less financial and media attention than other disasters and tragedies, such as the earthquake in Haiti or the floods in Pakistan.”

Famine in Africa is not a recent phenomenon. In 2003, the then WFP Executive Director James Morris referred to famine in Africa as an unprecedented crisis needing unprecedented response. He warned that “the magnitude of the disaster …has not been fully grasped by the international community” (see Africa Renewal, February 2003). Eight years later, the international community is still grappling with the same situation.

The UN, many governments across the world and celebrities are mobilizing to save lives in the Horn of Africa. The immediate goal is to stop the dying. But even if that is achieved, it will provide at best temporary relief. Climate forecasts for the next months are not encouraging, as the dry conditions are expected to continue, with temperatures rising even higher. Food prices will continue to rise, with Oxfam predicting they will double in the next 20 years (see Africa Renewal, August 2011).

As more hands get on deck to tackle the current crisis, the FAO insists that efforts also target the longer term, including providing implements and other logistical support so that farmers can improve their next harvests. However, even as farmers are ready to toil, they are asking when the rains will fall. And for Somalis, it is also when they will not have to flee in fright of hunger and the militia. Until then, the Horn of Africa remains what the BBC aptly describes as a “vision of hell.”