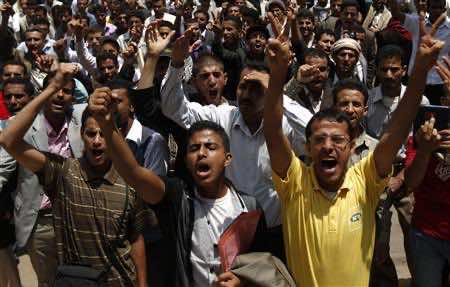 At least 15 protesters were killed in the Yemeni capital Sanaa on Sunday, when gunfire broke out at one of the biggest demonstrations against President Ali Abdullah Saleh in recent months, a Reuters witness said, .

Scores were wounded when security forces opened fire on the crowds and sprayed them with tear gas as tens of thousands spilled out of Change Square, where many youths have camped out, demanding an end to Saleh’s 33-year rule, a Reuters witness said.

Dozens of men were slumped on the ground, overcome by tear gas inhalation. Men on motorbikes and ambulances whisked them away from the scene.

Frustrated by Saleh’s tenacity and their failure to dislodge him, protesters are seeking to ratchet up demonstrations, which have dragged into their eighth month.

“Escalation, escalation,” they chanted, flooding side streets where there were large numbers of security forces and armed anti-Saleh tribesmen, who have appointed themselves as defenders of Yemen’s protest movement.

Earlier on Sunday, fighting broke out in a northern district of Sanaa, the latest breach of an uneasy ceasefire between tribesmen opposed to Saleh and troops loyal to him.

Shelling could be heard near the home of a prominent anti-Saleh tribal leader in the Hasaba district, the site of weeks of fighting. The family of Sadeq al-Ahmar said the Republican Guard, commanded by Saleh’s son, had shelled their house.

Saleh, recovering in Saudi Arabia from a June assassination attempt, is holding on to power despite international pressure to quit and eight months of protests against his 33-year rule which have bought the impoverished Arab state to the brink of civil war.

The United States and Saudi Arabia fear unrest in Yemen will embolden al Qaeda’s Yemen-based regional wing to launch strikes in the region and beyond.

On Thursday, mediators from neighbouring Saudi Arabia intervened to help end the street fighting, which was the fiercest in recent weeks, diplomatic sources said.