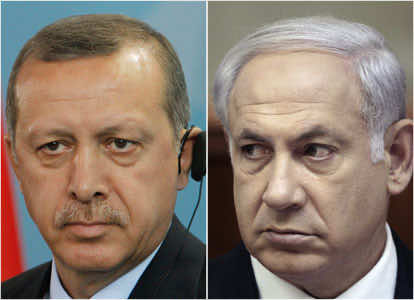 An interesting New York Times article by Ethan Bronner over the weekend pointed out the historic similarities between Israel and Turkey. Here is an excerpt: “The founder of modern Turkey, Mustafa Kemal Atatürk, and the founding prime minister of Israel, David Ben-Gurion, had much in common. This was not an accident.

Ben-Gurion, who studied law in ?stanbul, modeled himself on Atatürk, seeking to build an instantly modern society of like-minded and ‘ideal’ citizens with few deviations in language or culture. Both saw religion as a deviation and ethnicity as a problem. Like the Kurds of Eastern Turkey, the Moroccan and Yemeni Jews on the Israeli periphery faced an official — if less brutal –disregard.”

It is certainly true that resemblances sometime create divergence. Countries that share similar political cultures are not immune to tension. In fact, similarity, particularly sharing similar ambitions, often breeds jealousy and conflict. Take the examples of Islam and Christianity. In many ways, compared to more distant Asian faiths such as Buddhism and Hinduism, Islam and Christianity are sister religions. They share the Jewish heritage of monotheism and are Abrahamic faiths based on similar moral principles. Both have universal ambitions about spreading the faith and proselytizing. Principles of Hellenistic philosophy and Roman law and sharing the Mediterranean land are additional common denominators. Out of such resemblances stem competition and rivalry.

Similar dynamics are at play when you look at the American and French revolutions. They both declared the equality of citizens and the universality of human rights. Both revolutions went against old monarchies in order to institute democratic republics. Inspired by liberty, justice, equality and fraternity, they also have founding fathers who share similar ideas about the need to separate church and state. Yet, out of such resemblance of ambition is born the rivalry between France and the United States. Both countries take their global message and mission very seriously.

Is something similar at play between Israel and Turkey? In many ways, the New York Times article, which argues that Turkey and Israel share not only similar political cultures but also now have governments with common tendencies, is eye opening. For instance, both Turkish Prime Minister Recep Tayyip Erdo?an and Israeli Foreign Minister Avigdor Lieberman have a strong tendency to dismiss the elitism of their critics.

As the article written by Bronner, the New York Times Jerusalem bureau chief, reminds us that Erdo?an in 2010 blew off retired Turkish ambassadors’ criticism of his foreign policy with the words “mon chers” (meaning a bunch of “my dears” who are overly concerned about pleasing the West). “Foreign Minister Lieberman similarly dismissed Israelis who found his policies too tough as ‘feinschmeckers,’ those with overly refined tastes. In neither case was the derisive use of a European term accidental. Turks have been offended by the endless stalling of their country’s application to the European Union. Israel’s establishment, supported by a mix of Jews from the Middle East and former Soviet Union, views the elite of Old Europe, with its pro-Palestinian sentiments, with disdain.”

Alon Liel, a retired Israeli ambassador who this year co-authored a very interesting book about the history of Turkish-Israeli relations, takes the analysis a step further. He argues that 2002 in Turkey and 1977 in Israel were watershed years that produced similar political outcomes. In Turkey, the Kemalist elite ignored the religious leadership, the countryside and the Kurds, creating groups of very unhappy people who cohered into a new political opposition under the leadership of Erdo?an, who came to power in 2002.

The same happened in Israel, when Menachem Begin connected with similar segments of Israeli society in 1977. “Today, both Erdo?an and Netanyahu rule from a support base that is more religious, more rural and less educated, where honor and nationalism are important. That makes the relationship between the two very hard,” argues Liel.

You can multiply examples. Both Israel and Turkey are engaged in battles against militants — Israel against Hamas and Turkey against the outlawed Kurdistan Workers’ Party (PKK). Both occupy land in defiance of the international community — Israel in the West Bank and East Jerusalem, Turkey in northern Cyprus. Both are entrepreneurial and hard-working economic success stories that constitute exceptions in the region.

At the end of the day, it is very telling that such common points that brought the two countries to sign a strategic alliance in 1996 today breed differences. This is another clear example of the old maxim in international relations: context matters. What has changed compared to the 1990s is the absence of a peace process between Israel and Palestine.