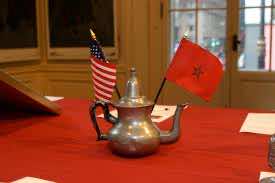 Fez – American have a lot of Conceptions and Misconceptions about Morocco. Since I have been planning my trip and talking with my American friends about my preparations, I have heard and thought of many things which cause me concern.

One warning that many people have given to me is that I should take care to watch for pickpockets and robbers.

Many members of my family have expressed concern for my safety. My own mother warned me against going for fear that I may be robbed and murdered. I have thought a great deal about this. Of course I would be unwise to place myself in a position of danger without considering what I am doing, but I wonder if I would really be in any more danger than I am here in my own country.

I live very near to Indianapolis and Chicago. I can be in either city within an hour or two. Every day people are robbed and murdered in those cities. It is in the newspapers and it is widely known that drug dealers and gangs kill people there. However, I find it very interesting that when I am in those cities none of my friends nor family express concern for my well being. Why would I be more endangered in Morocco than in America?

Perhaps if I stand out as a foreigner, I might more easily become the target of some criminal’s designs. To be sure, knowledge of one’s surroundings and situation are good protection against crime but I do not think that every Moroccan is standing by waiting to cut my throat and take my money. Such a notion is preposterous. I will have to be more careful while I am in Morocco because of language and culture barriers. Those issues could make it a bit easier for me to get

into trouble, but I do not expect that any great harm will come to me simply because I am a foreigner.

This both saddens me and concerns me. I have corresponded with several Muslims and I like them. They seem very nice and very sincere. I do not like to hear them slandered in this manner. The difficulty is that up to this point in my life, I have never met a Muslim face to face.

As far as I know, I have never even seen a Muslim except in films or photographs. Could it be that these “kind” Muslims are simply trying to lure me to Morocco so that they can kill another Christian Westerner as some of my American friends suggest?

While I do not hear this from all Americans, some do suggest it. This is my first time to ever leave the country, of course I am nervous and things such as this remain in my mind. What if they are simply luring me to my death?  I have thought about it for a long time and finally my conclusion is, “Inchallah” as they say in Arabic.  Let God’s will be done.

I would rather take that risk and trust these people who seem to be so good, than to think badly of them for no reason. If they are good, then I will come back to America and defend them and their honor; if they are truly so wicked as some Americans believe, then perhaps I will escape with a well learned lesson. I think it would be better to die with sincerity and kindness in my heart than to live a life which is full of unfounded prejudice and hate.

Another concern which my friends have expressed is closely related to the issue of animosity toward Christian Westerners. One of my college professors emailed several articles to me which discussed an expulsion of Christian Missionaries which happened in Morocco a few years ago.

This of course was taken to confirm that Muslims hate Christians and that Christians are not welcome in Morocco. It is suggested that at the very least there is a prejudice against Christianity in Morocco and the King who is a Muslim will do whatever he can to prevent the spread and promotion of any religion save his own.

His Majesty, King Mohamed is a Muslim of course that is no secret. I have thought much about this. Suppose he does try to prevent Christianity from becoming well established in his country, does this make him a criminal? We westerners would do well to remember our own history on this point. We forget that we are very far removed from the days of strong monarchy, but the King of Morocco still does wield power.

In the old times when the Kings and Queens of Europe ruled with strength and power, many men and women lost their heads or were burned alive because their religious opinions were not the same as those of the crown. When we think about things from this perspective, it seems obvious that the King of Morocco rules with charity.

After all, it is not Christianity that is outlawed but Christian Mission work. According to my studies, there were Christians in Morocco long before America was ever discovered. It hardly seems necessary then that we should send missionaries to Morocco.

In addition to all of this, I managed to find a paper which was published by the State Department of the United States concerning religious freedom in Morocco. I was very surprised as I read it, to discover that in 2009 there were seven hundred ninety-nine Imams who were dismissed for various infractions. This makes it rather obvious that the law is dispensed with equity even if it is preferred that Christianity does not spread in Morocco.

One common misconception about Morocco that I have noticed among Americans concerning Morocco is about the inhabitants of that country. Many people will ask, “Where is Morocco?” and if I tell them it is on the continent of Africa, then they immediately begin to talk about the “Negros” who live there. This misconception is so widespread that I have stopped saying anything about Africa when people ask me. I nowmis tell them that Morocco is across the Strait of Gibraltar from Spain.

As I live in a culture which continually challenges my every thought and perspective as a Christian Westerner, I believe that my misconceptions about Morocco will be more easily shown and dispelled.

In addition to that, I hope that my positive impressions will only be confirmed and strengthened as I continue to interact with the good people of the Kingdom of Morocco.

* Jess L. Norton is a contributor Morocco World News. He currently lives in Fez, Morocco. This article was drafted before he settled in Morocco in March 2011.