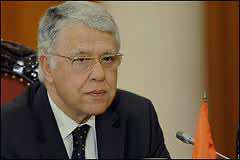 Morocco needs to rein in public spending and curb the cost of government. That was the message from Prime Minister Abbas El Fassi to ministers earlier this month in guidance on the draft 2012 state budget.

With regard to employment, El Fassi called on his colleagues to make provision only for what was absolutely essential for the process of government. The state’s fleet of motor vehicles, procurement, rental of buildings and communication services are other areas where the government will look to make savings. The prime minister also intends to cut spending on catering and accommodation and spend less on conferences and overseas visits. Less money will be spent on project studies.

Subsidies will be limited to 3% of GDP in order to “allow for extra leeway in the budget so that the government’s books can be balanced”.

In addition to the spending cuts, authorities are also exploring ways to raise new revenue to see the kingdom through its current financial difficulties. The government was reportedly looking into a wealth tax, something welcomed by many members of the public, but Communications Minister Khalid Naciri denied the reports on September 7th.

At the same time, efforts will be made to ensure that investment is not affected. The prime minister underlined that the various government departments must maintain an adequate level of investment while taking into account the need to support priority development areas.

Morocco is currently in a tough economic and financial position that calls for prudence, according to economist Adil Mahdaoui. In his view, government revenues have been stagnant for several years due to corporate and income tax breaks. He said the situation was exacerbated by the burden of subsidies.

Mahdaoui suggested that a solidarity tax and a policy of priority-based governance be introduced so that a balance can be maintained. He added that the next government will have a very difficult task on its hands and will have to draw up an emergency action plan.

The bid to cut spending is leading to fears of public-sector job losses, sociologist Moha Chirabi said. A number of pledges have been made and thousands of young people are still unhappy with the situation, he said, though the guidance memorandum stresses the need to create as many jobs as possible in the circumstances. Chirabi said he was concerned about the level of support being given to the most vulnerable members of society.

But Communications Minister Naciri dismissed the concern, saying the government was committed to the poorest in society. He stated that a desire to support society was central to the government’s plans.

He has also pointed out that the government planned to create a social solidarity fund and to find ways of financing it in order to relieve the burden on Compensation Fund, from which all social categories benefit.